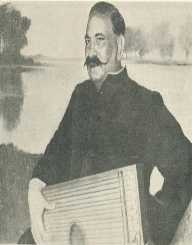 Bade Ghulam Ali Khan was born on April 2, 1902. He was a classical vocalist.

Bade Ghulam Ali Khan was born on April 2, 1902, in Kasur, Pakistan. He was born to Ustad Ali Baksh Khan who was a singer in a West Punjabi family. He began learning vocal music at the age of five under his uncle, Ustad Kale Khan. He also learnt music from his father. He was brought up alongside three siblings, Mubarak Ali Khan, Amaan Ali Khan and Barkat Ali Khan.

Bade Ghulam Ali Khan began his career by singing several compositions made by his late father and uncle. He sang what the audience wanted and not what has been sung from the past. In 1947, he went to Kasur after the partition of India. In 1957, he returned to India permanently where he acquired Indian citizenship with the help of Morarji Desai. He lived in a Bungalow in Mumbai. In 1960, he sang in the film ‘Mughal-e-Azam’ with the music directed by Naushad. He charged Rupees 25, 000 per song when he sang for cinema.

In 1962, Bade Ghulam Ali Khan received the Sangeet Natak Akademi Award and the Padma Bhushan Award. The street at Basheer bagh is named after him in his honour.

Bade Ghulam Ali Khan died on April 23, 1968, of ill health as Basheerbagh Palace, Hyderabad. He died at the age of sixty six. He was succeeded by his younger son, Ustad Munawar Ali Khan. He was known for singing Hindustani classical music.