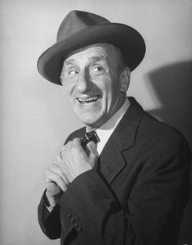 Jimmy Durante was one of America’s famous actor, singer, comedian, and pianist. Born on February 10, 1893, he gained popularity and fame with his unique jazz-influenced songs, comic language butchery and his projecting nose, which made him very familiar figure throughout his career. Durante normally referred to his nose as the Schnozzola, which later became his nickname.

Jimmy Durante was born on February 10, 1893, on the Lower East Side of New York City to Rosa and Bartolomeo Durante. He was the fourth and youngest child of his parents who were both immigrants from Salerno, Italy. Jimmy Durante during his young age served as an altar boy at Saint Malachy’s Roman Catholic Church. Growing up he was also interested in learning musical instruments and perfected on the piano.

Jimmy Durante cut short his education at seventh grade to pursue a career as a full-time ragtime pianist. During this time he played with his cousin also called Jimmy Durante. Jimmy Durante was nicknamed the "Ragtime Jimmy due to his continues play at the City piano bar circuit. Jimmy Durante later joined the Original New Orleans Jazz Band, which was one of the pioneer jazz bands in New York and Jimmy Durante became the only none-New Orleans members. While with the band, Jimmy Durante carved for himself a trademark, which was breaking into a song to tell a joke while the band or orchestra chord punctuation after each line. His popularity necessitated the change of the group’s name to the Jimmy Durante's Jazz Band in 1920.

Jimmy Durante came out with the pop standard album  September Song in 1963. The album became very successful giving credence to Durante’s talent and rejuvenated his career. Jimmy Durante also recorded the album Jimmy Durante's Way of Life, with the hit song As Time Goes By, used in the opening credit of the comedy Sleepless in Seattle. He did the cover of I’ll Be Seeing You, which he used as a trademark song for his television show and was featured in the film The Notebook in 2004.

Jimmy Durante became one of the famous entertainment stars and radio personality as a member of the trio with included Eddie Jackson, Lou Clayton in the 1920s. In 1929, Jimmy Durante was a cast in Broadway’s Show Girl. On December 8, 1930, Jimmy Durante appeared with Jackson in the Cole Porter musical, The New Yorkers as an opener on Broadway. They two had already appeared in the movie Roadhouse Night based on the novel Red Harvest by Dashiell Hammett. Jimmy Durante came out with the hit song Inka Dinka Doo with lyrics from Ben Ryan in 1934. This song became his theme for all his radio programs. In 1935, Jimmy Durante was cast in Jumbo, a Billy Rose stage musical.

Jimmy Durante continued his stunning performance with Red, Hot, and Blue in 1936 as Jimmy Durante had already appeared in Strike Me Pink in 1934. His popularity grew to the extent that he featured in both Hollywood and Broadway production during the early 1930s. Some of his foremost motion pictures include Robert & Heart’s musical, The Phantom President, 1932, and played alongside Buster Keaton in Metro-Goldwyn-Mayer comedies, The Passionate Plumber, 1932, Speak Easily, 1932 and What! No Beer? in 1933. All the three films were an instant hit and did very well commercially. Jimmy Durante also appeared in The Wet Parade, 1932, Broadway to Hollywood, 1933, The Man Who Came to Dinner in 1943 and Ziegfeld Follies in 1946. Others include Billy Roses’s Jumbo, 1962; It’s a Mad, Mad, Mad, Mad World, 1963.

Durante’s debut on the radio was on September 10, 1933, when he appeared on Eddie Cantor’s show The Chase and Sanborn Hour on NBC and continued to make an appearance until November 12, same year. He took over the show on April 22 to September 30, 1934, when Cantor had left. From 1935 to 1936, he was on The Jumbo Fire Chief Program. He continued with his radio career, and in 1943, he and Garry Moore came up with The Durante-Moore Show. The show became very popular and through that came the phrase "Dat's my boy dat said dat!" It also gained them fame becoming one of the nation’s favorites the entire decade. Teaming with Frank Sinatra, the came up with Armed Forces Radio Network Command Performance, which is up till date one of the favorites of radio-show collectors. The program later became The Jimmy Durante Show on October 1, 1947, as he parted with Garry Moore and hosted it until 1950.

On November 1, 1950, Jimmy Durante widened his career scope by venturing into television as a guest of Tallulah Bankhead’s NBC comedy-variety shows The Big Show. He was part of the cast on its premiere on November 5, 1950. Jimmy Durante also became one of the four alternating hosts of NBC's comedy-variety series Four Star Revue from 1950 to 1951. Other hosts were Ed Wynn, Danny Thomas, and Jack Carson. Jimmy Durante was on Wednesday alternates with Danny Thomas. In the 1960s, he hosted the ABC’s Hollywood Palace variety show, which was shown live. From 1969 to 1970, Jimmy Durante co-starred with the Lennon Sisters on Jimmy Durante Presents the Lennon Sisters Hour, shown on ABC for one season. That was his last regular television appearance.

After It’s a Mad, Mad, Mad, Mad World, Jimmy Durante continued to make some television appearances, through commercials and also lend his voice for some movies characters. In 1969, Jimmy Durante narrated Frosty the Snowman, a Rankin-Bass Christmas special animation. Jimmy Durante did commercial spots for Kellogg's Corn Flakes cereal. In 1973, Jimmy Durante appeared in a commercial for Volkswagen Beetle and in that, he said the Beetle had "plenty of breathin' room... for de old schnozzola!"

Jimmy Durante was married twice, first to Jean "Jeanne" Olson on June 19, 1921. Jeanne died on February 14, 1943, at age 46 of heart failure. She died while Jimmy Durante was on tour in New York but returned later for the funeral arrangement. He then married Margaret "Margie" Little, on December 14, 1960, at the St. Malachy's Catholic Church in New York City. The couple adopted a daughter, Cecilia Alicia on December 25, 1961. Durante died on January 29, 1980, of pneumonia in Santa Monica, California. He was buried at Holy Cross Cemetery, Culver City.