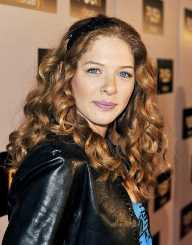 Rachelle Lefevre is a Canadian actress who came into prominence with her notable role of Victoria Sutherland in the Twilight Saga. This gave birth to fascinating films such as What about Brian and Boston Legal. Since 1999 Racheal has proved her stance in both film and television industry.

Rachelle Lefevre was first seen in the world on 1st February in 1979 at Montreal, Quebec, Canada. Rachelle's father was famously known as an English teacher who derived from French descent. Not to mention her mother was a professional psychologist who came from Jewish descent. However, her parents called quits when she was two years old. Rachelle's mother came to remarry a Jewish. Lefevre has three younger siblings.

Rachelle joined Centennial Academy for her early education. She then attended Dawson College where she majored in creative arts. She also studied a theater course when she joined Walnut High School in Natick city, Massachusetts. After a short pause, she joined McGill University where she studied literature. Nevertheless, Lefevre dropped out before graduation.

After her studies, Rachelle landed a job at a Westmount-based sushi bar. It was here that one of the Canadian producers spotted her talent. She was tested with a play titled Student Bodies, but she didn’t manage to appear in a real movie. After several attempts, she took a role of Stacey Hanson in the Big Wolf on Campus film in 1999.

In the course of new millennium Rachelle continued to appear in both small and big films. In the process, she rose to fame when she appeared in a television show that was called Seen Jane Date. She followed it up with Hatley High and Confessions of a Dangerous Mind. In 2004 Rachelle moved to Western Hollywood in California. While still here, she starred in countable movies such as Noel, Head in the Clouds as well as The River King. Besides, she has also appeared in several television dramas including Undressed; Love’s a Witch and Charmed.

Lefevre acting talent continued to shine beyond her reach. But she was made a celeb when she played a Victoria role in the Twilight series. It was in this role that she showed all her emotional and hidden feelings. She worked day and night just to make sure that her character took the audience's heart. This made her receive countless of invites and in the end; she appeared in movies like New Moon.

Throughout her career, Rachelle Lefevre received a Teen Choice Award for her Villain film. Further, she has shown interest in charity works. For instance, she donated over $100 to the Cure of Breast Cancer organization. She is also a known socialist who resides in Los Angeles. When it comes to her relationship status, Lefevre isn’t yet married. But she had a close relationship with actor Jamie King till 2009 when she started to date Chef Chris Crary.