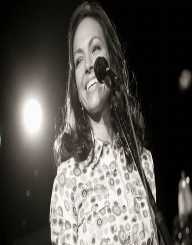 Joey Feek was born on September 9, 1975. She was an American bluegrass and country singer. She was also a songwriter. She sang with her husband in their duo Joey+Rory. She was the lead vocalist in the duo. She got her inspiration to sing country music from Dolly Parton.

Joey Feek was born on September 9, 1975, in Alexandria in Indiana. She was born to Jack who plays the guitar and June who was a gospel singer. She was brought up alongside four siblings. She grew up in the country as she was always around horses, barns, and cattle. She developed the love for country music due to being raised in a farming community. She started singing at a young age. Her first .performance was in the first grade talent show at her school. She was inspired by singers such as Dolly Parton, Loretta, and Patty.

Joey Feek graduated from High School and got a job as an assistant for a horse veterinarian. She worked with the veterinarian for three years. At the same time, she sang in Madison County in a band and sometimes individually. In the 1990s she moved to Nashville in order to kick start her singing career. In 1998, she moved to Lewisburg where she worked for another horse veterinarian. She also continued singing. In 2000, she signed a contract with Sony Records and recorded an album. The album was however not a success. In 2004, she recorded the album ‘Strong Enough to Cry,’ but it was also not a success.

In 2002, she got married to Country singer Rory, and they started singing as a duo. In 2008, they participated in the CMT’s competition ‘Can you Duet.’ They came in third place in the competitions. They called themselves Joey+Rory, and they got much exposure into the music industry after the competition. They signed a contract with Sugar Hill/ Vanguard Records with whom they recorded their debut album ‘The Life of a Song’ which was released in 2008. The album’s single ‘Cheater, Cheater’ was a hit, and it was a top forty of the Billboard country charts.