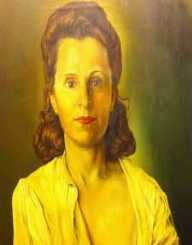 Gala Dalí was born as Elena Ivanovna Diakonova on September 7, 1894. Known to many as business manager and the key inspiration to her husband, Salvador Dalí. Gala got married twice, first to Paul Eluard, a French poet and later to Salvador Dalí (1934), a well-known artist in surrealism.

Gala Dalí was born on September 7, 1894. She grew up in a town filled with intellectuals in Kazan, Russia. Her birth date left many in doubt, reported differently as 1892 and 1895 although her daughter cleared the doubts and confirmed it as mentioned here. In 1915, she started working as a schoolteacher in Moscow.

In 1934, Dali and Gala Dalí got married in a Catholic ceremony. Gala posed as an inspiration to Dalí over the most of her husband's active artistic career. Most of Dalí's paintings had the couple's signature at the bottom, indicating the depth of their partnership.

Gala occasionally posed as a model for her husband's paintings, most notably the Portrait of Galerina (1945). She also handled all the financial aspects of Dalí's business.

Gala Dalí met Paul Eluard in 1912 in Switzerland where she had gone to seek treatment for tuberculosis. At the time, they were only 17 years old. Paul later joined the French Army for World War I while Gala returned to Russia.

The two then reunited in Paris a year later and she gave birth to their daughter, Cecile (1918). The media reportedly accused of neglecting her daughter and parenting responsibilities.

Gala Dalí became part of the Surrealist movement because of her engagement with Eluard. This made her become an inspiration not only to Eluard but many other artists. Eluard and Gala's marriage broke up in 1929. During this time, she met and fell in love with her second husband, a much younger Salvador Dalí.

Gala Dalí died on June 10th, 1982 in Port Llidat. She had suffered from severe flu. Her husband Dalí had earlier gifted her with a castle. The castle was used to burry Gala and later converted to the Gala-Dali House Museum for public viewership.