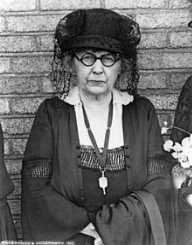 Harriot Stanton Blatch was an American women rights movement leader, who fought against the slave trade and other social injustices in American society.

Harriot Stanton Blatch was born to Henry and Elizabeth Stanton on January 20, 1856, in New York. She grew up in a civil rights environment. Her father was an active member of the abolitionist movement, while her mother was a leading women rights campaigner. Blatch was the second last child in the family of seven children.

She started her education in local private schools. Blatch enrolled at Vassar College. In 1878, she graduated with a mathematics degree. After her graduation, she followed her parents in the rights movement. Blatch taught at the Boston School for Oratory. After spending one year at the Oratory school, she went to Germany for another year. Upon her return to the US in 1881, she started working with her mother in the women suffrage offices in New York. She helped the suffragists in the production of the book History of Women Suffrage. The book was published in 1881 by her mother Elizabeth Stanton and her colleague Susan Anthony. In the book, the authors serialized the journey of the American woman in her bid to have the right to vote in elections.

Blatch met her future husband in 1881 while traveling back to the US from Germany. They got married in 1882 and for England. She spent the next twenty years with William Blatch in Basingstoke. In England, she got involved with the local British reformist groups. She enrolled for a master degree at Vassar and graduated in 1894. Blatch did a thesis on the rural life of the English villages.

She eventually relocated back to the US in 1902. Once in the US, she started working with the American suffrage movement. She joined the Women’s Trade Union League. After a while, she joined her mother at the National American Suffrage Association. Blatch soon left the two organizations due to internal strife.

She organized the formation of the Equality League of Self-Supporting Women. Blatch gradually enrolled underserved women into the organization and the cause. The Equality League became a vital component in the agitation of women rights in America. Blatch used public forums and collective participation to inject ideas into the membership.

In 1915, her husband died after an electrocution accident. Blatch reapplied for her US citizenship. After regaining it, she left for England to oversee her husband’s estate. In 1917 she returned to America and joined the Women’s Land Army. In the organization, Blatch and others agitated for the rights of women to own and inherit the land. She used the Land Army to encourage women to embrace agribusiness at the time when it was the reserve of men. Blatch had immense success with her agribusiness campaign during the first and second world wars.

As a journalist and author, Blatch published several books on the rights of women. In 1918, she published Mobilizing women Power. Two years later in 1920, she published A Woman’s Point of View: Some Roads to Peace. In 1922 she published a book about her mother. The book titled Elizabeth Cady Stanton was published in 1922.

Blatch used her connections within the suffrage movement to enter into active politics. She ran for the office of the Comptroller of New York in 1921. She lost the elections on her Socialist Party ticket. She made an unsuccessful comeback in 1926. Blatch ran for the New York State Senatorial seat on the Socialist Party. She lost the elections yet again.

Blatch left the party which became uncomfortable with her progressive politics. She agitated for greater freedom to the women in the US. The Socialist Party hierarchy was more contented with the protective freedom which curtailed rapid emancipation of women. Blatch worked with the League of Nations in the late years of the 1920s.

Blatch spent most of her twilight years in a nursing home in Connecticut. In 1939, she suffered an accident fracturing her hip joint. She used her secluded period to publish her memoirs titled Challenging Years. She published the autobiography in 1940 with the aid of her friend Alma Lutz.

She died on November 20, 1940. Blatch was 84 years of age. She was survived by her daughter Nora Barney. Nora became a suffragist in her own right. She also became the first women to earn a civil engineering degree in the US.

Harriot Stanton Blatch is idolized for her work in the suffrage movement. She galvanized the women socio-political reform agenda to bring better rights for the American women.