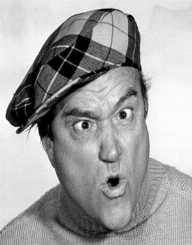 Richard Bernard Skelton was born on July, 18th, 1913. He was an American actor and a comedian who rose through the ranks of success by doing what he does best; make jokes. He was also a pantomimist with a radio personality which impressed many. He worked with the NBC for 20 years. At the beginning of his career, he primarily performed in burlesque and minstrel shows. This was before his major career breakthrough which occurred in 1938. Success had come from both his remarkable radio and TV personality. Later on, this had a major influence in his film career as he featured in several films.

Red Skelton was born on July 18th, 1913. His birthplace was in Vincennes, Indiana in the United States. He was the youngest son of Joseph Elmer Skelton and Ida Mae. His father was a grocer. Skelton did not get the chance to see his father as he passed away two months before his birth. Sources claim that at one point his father had also worked as a clown. His father’s death contributed to Skelton’s early hardship as he had to work by the time he was seven years old. He worked as a newspaper boy.

While working in his newspaper job, Skelton crossed paths with one of the comedians, Ed Wynn working in the shows being held in town. Wynn bought the papers that the young boy was selling and took him backstage. This gave Skelton a reason to dream of engaging in the entertainment business.
It did not take time before Skelton was out of school chasing his dreams. He performed at the local burlesque circuit and in showboats.

After marrying his wife, Skelton worked with her in some of the shows he was playing. With the engagement that they got in 1934 in Montreal's Lido Club, the couple managed to pull shows to their end. Indeed, the beginning was tough for the two, but their comedic prowess landed them theatre dates in all over Canada.

In five years time, Skelton shifted into acting and making his debut in the film industry in 1938. Skelton played the role of a camp therapist in the film, Having Wonderful Time. In 1939, he went on to feature in Vitaphone, a sound film known back in the day. The title of the sound film was Seeing Red and The Broadway Buckaroo.
Later on in the 1940s, his "Doughnut Dunkers" performance earlier on was still acclaimed, and this made him earn a performance for the president, Roosevelt, during his birthday party.

After passing the MGM screen test, Skelton began working with the film organization and featured in some films including, Flight Command- 1940, Dr. Kildare's Wedding Day-1941, The People Vs. Dr. Kildare-1941, Whistling in the Dark-1941 Whistling in Dixie- 1942 and Whistling in Brooklyn -1942. In the Whistling film series, he played alongside Ann Rutherford.

In 1931, Skelton got married to Edna Stillwell, who was his first wife. The couple later separated in 1943. Two years later he remarried for the second time to Georgia Davis. The couple had a daughter and a son together. In 1971, Skelton divorced Davis. His third and last marriage was to Lothian Toland in 1973.

Red Skelton died on September 17th in 1997. He had been suffering from pneumonia which contributed to his death at the age of 84.