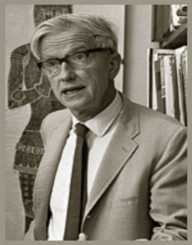 Max Delbrück was born on September 4, 1906, in Berlin, Germany. His parents were Carolina Thiersch and Hans Delbrück.

Max Delbrück had a tough childhood, as he was a teenager during World War I. Even with chaos around him, he still found time for his studies. As a child and teenager, he was particularly interested in math and science. After finishing his secondary education, he enrolled in the University of Tubingen.

However, he transferred school several times in a short amount of time before finally settling at the University of Gottingen, where he focused his studies on science, in particular, physics. Finally, in 1929, only five years after first starting college, he earned a Ph.D. in physics.

In 1932, Max Delbrück earned his first professional job as a research assistant to the scientists Lise Meitner at the Kaiser Wilhelm Institute for Chemistry. It was here that he began to change his focus from physics to biology as he became interested with the actions of bacteria. While here, he also published several papers, which were not mainly focused on biology, but still on physics.

One of the most important papers which Delbrück wrote while working at the Institute was his paper on gamma rays. He suggested that photons in the Coulomb field of heavy nuclei could be scattered. At first, his paper was not agreeable with other scientists, but his theory was later accepted by Hans Bethe, which made the idea famous. It was later named after Delbrück and called Delbrück Scattering.

In 1937, Max Delbrück left the institute and moved to the United States where he began to work at the California Institute of Technology. His work was funded by the Rockefeller Foundation Fellowship. While working here, he met another scientist, Emory Ellis, who would later become one of his major career partners. Together, they researched and even wrote a book: Growth of Bacteriophage. In 1939, his fellowship expired, and he stopped working at the Institute.

After he stopped working at the Institute, Max Delbrück stayed in the United States, as he did not want to return to Nazi Germany (as he disagreed with their politics). He began working at the Vanderbilt University in 1940. Here, he taught physics. While here, he continued his research, most of which was done at the Cold Spring Harbour Laboratory. Here, he met another scientist, Salvador Luria, who was also researching bacteriophage (a type of virus that infects and reproduces inside of bacteria). The two scientists soon began researching together.

Max Delbrück and Luria became fast friends and great partners as they researched together throughout the 1940’s. They wrote several papers together. Later on, in the same decade, Delbrück also became acquainted with Alfred Hershey. Together, they formed the Phage Group. The group held meetings on the research each member had done of bacteriophage. In 1945, Max Delbrück created the Phage Course, which was like a larger version of the Phage Group. Scientists from all over the world who were studying bacteriophage would come to this meeting to discuss and share their research findings.

In 1946, while working with Hershey, Max Delbrück discovered what is now known as genetic recombination. In this strange, but not uncommon, action, an offspring of two parents will have traits that its parents do not have.

Nobel Prize in Physiology or Medicine (1969)
Max Delbrück was also a foreign member of the Royal Society, beginning in 1967. He was also made a member of the European Molecular Biology Organization in 1970.

Max Delbrück married May Bruce in 1941. Together, they had four children: Ludina, Jonathan, Nicola, and Tobias.

Max Delbrück died on March 9, 1981, in Pasadena, California, USA. The cause of his death was cancer. He was 74 years old when he passed away.