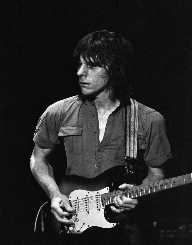 Jeff Beck was born on 24th June 1944, to Arnold and Ethel Beck. He was born in Surrey, England, in a town called Wallington. Jeff Beck was musically inclined from a young age, singing in the church choir as a youngster, and then trying to make his own guitar after borrowing a friend’s guitar to learn how to play.

Through the early 1960’s, Jeff Beck was in several bands. He started with Screaming Lord Sutch and the Savages, followed by Nightshift. He then left Nightshift and joined the Tridents. After the Tridents, Jeff Beck joined the Rumbles. In 1965, he joined the Yardbirds. Jeff Beck was only with the Yardbirds for just under two years, but it was during that period that they recorded most of their hit songs. Jimmy Page was in the band with him, and Beck had replaced Eric Clapton. Due to continual no-shows and other problems with Beck, he was fired from the band during one of their U.S. tours.

Jeff Beck recorded two solo hits, and then formed the Jeff Beck Group. His group included some very well-known names such as Rod Stewart, Ronnie Wood and Nicky Hopkins. They released two albums, but with some controversies within the group and while touring, the group broke up in 1969. Shortly after that, Jeff Beck was in a car accident and received a fractured skull which put his music plans on hold for over two years.

In 1970, after recovering, Jeff Beck formed another band. They were still called the Jeff Beck Group, but they sounded very different to the original group. After recording a couple of albums in the U.S., the group disbanded. Jeff Beck began working with other musicians, and they continued to tour under the same name until the contract conditions had been met. Throughout the next few years, Jeff Beck continued to perform and record music. He put a band together, and in 1975 they toured in the U.S.In 1976, he was back in the studio to record his next album.

1976 and 1977 saw Jeff Beck undertake a world tour, followed by another album, and then yet more touring through the U.S. and Japan amongst other countries.

In 1981, Jeff Beck made several live appearances with Eric Clapton. The finale included such names as Sting, Phil Collins, Bob Geldof, and Donovan. An album and film were subsequently released and became worldwide hits in 1982. In 1989, after a break of several years, an instrumental album was released.

During the 1990’s, Jeff Beck collaborated with several artists and performed on their albums. The next album of his own music wouldn’t be until 1999. He continued to collaborate and perform with people such as B.B. King, Eric Clapton, and Kelly Clarkson.

In 2009, Jeff Beck announced he was going to embark on a world tour, which was very successful. Harvey Goldsmith became Jeff Beck’s manager that same year. Jeff Beck continued to successfully record and tour over the following years, and in 2013 he joined Brian Wilson from the Beach Boys on his solo album and tour.

In 2014, Jeff Beck once again began a world tour, starting in Japan. Jeff Beck has released 15studioalbums and has released three collaborative albums. On the Rolling Stone’s list of the “100 Greatest Guitarists”, Jeff Beck came in at number five, recognizing him as one of the greatest guitarists of all time.

Jeff Beck has won eight Grammy awards for his music over the years. The first was in 2001.

In 2009, he was inducted into the Rock and Roll Hall of Fame as a solo artist. The award was presented by none other than Jimmy Page.

Out of interest, he has been a vegetarian since 1969 and is a patron of the Folly Wildlife Rescue Trust.