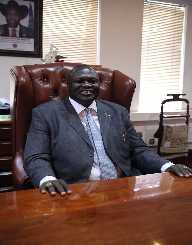 John Garang was born on June 23, 1945. He was a Sudanese politician. He served as the President of Sudan during the Sudanese Civil War. He also served in the Sudan army during his young years. He founded Sudan People’s Liberation Army. He is popularly known for his belief that he would achieve a united nation known as New Sudan which would be governed by representatives from all the tribes in the country.

John Garang was born on June 23, 1945, in Wangulei, Sudan. He was born to Dinka parents who died when he was ten years old.  He attended elementary school in Wau and Rumbek. In 1926, he took part in the Sudanese Civil War which was known as Anyanya Rebellion. He later moved to Tanzania where he completed his secondary education. In 1969, he graduated with a degree in Economics from Grinnell College in the United States of America. He later won a scholarship to the University of California in Berkeley. He then moved back to Tanzania where he joined the University of Dar es Salaam where he studied agricultural economics. As a student, he joined the University’s Students’ African Revolutionary Front.

After graduating from the University of Dar es Salaam, John Garang returned to Sudan where he joined the Sudanese Army. He served in the army from 1972 to 1983 at which point the Civil War had stopped after the signing of the Addis Ababa Agreement. He was later promoted to the rank of colonel in the army after he pursued the Infantry Officers Advanced Course in Georgia, United States of America. He later took a break from the army to finish his Master’s Degree and Ph.D. in Agricultural Economics for the Iowa State University. After he completed his studies, he returned to Sudan where he was appointed an instructor at a Military Academy in Wadi Sayedna. He later became a member of the research department at Khartoum, Sudan for the Army.

John Garang formed the Sudan People’s Liberation Movement/ Army which was an insurgent movement which rebelled against the government. The movement rebelled against the Islamic government and its rule. Their rebel inspired other soldiers from the army to join them. The protests led to the Second Sudanese Civil War which lasted for more than twenty years. John advocated for a New Sudan which would be a nation marked with peace and unity. He aimed at removing President Omar Al-Bashir from the presidency. In 1985, he made his first move towards achieving his dream for Sudan when his movement attacked Kordofan in Central Sudan. The movement took over Southern areas in Sudan and named then New Sudan.

The movement was supported by states such as Ethiopia, Libya, and Uganda. In 2005, President Omar signed the Comprehensive Peace Agreement with John Garang who was the leader of the Sudan People’s Liberation Movement/Army. In the same year, John became the first Vice President of Sudan and the President of Southern Sudan. Even though John aimed to unite the nation, some people saw his ideas as a mixture of Christianity and Marxism. John’s views were supported by President George Bush who referred to him as a Partner in Peace.

John Garang was married to Rebecca Nyandeng De Mabior. Rebecca is currently the Advisor for the President of The Republic of South Sudan. He died on July 30, 2005, in a plane crash after a meeting he had in Uganda with President Yoweri Museveni. His funeral service was held on August 3, 2005. His wife promised to continue with the mission her husband had. He was buried in Juba, Sudan. In 2011, a statute was erected on his grave in his honour.