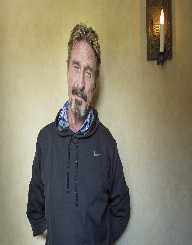 The developer of the McAfee computer virus platform John David McAfee was born in Forest of Dean, Gloucestershire, England on the 18 September 1945. His father was American, his mother British and he was brought up in Salem, Virginia in the United States. McAfee’s parents met when his father was stationed in the UK during World War II. When McAfee was fifteen years old, his father who was said to be an abusive alcoholic who committed suicide. (Source BBC News 11-10-2013). It was a few years later that McAfee was starting experimenting with drugs and alcohol.

John McAfee graduated from Roanoke College, Salem, Virginia in 1967 with a B.A. in mathematics. He was lecturing at Northeast State Louisiana State College and working on his Ph.D. in mathematics when his position was terminated after it was discovered that he was involved with a student he was mentoring. McAfee later married the student.

His first employer was the Institute for Space Studies in New York City where John McAfee worked as a computer programmer (1968-1970). He also worked at Univac, Xerox, and the Computer Sciences Corporation. In the early 1980s, McAfee worked as a computer consultant and later joined Lockheed Martin. It was while working at Lockheed in the mid-1980s that McAfee became interested in computer viruses and developed the McAfee anti-virus software just as the use of personal computers was increasing at a phenomenal rate. He founded McAfee Associates in 1987. In 1994, left McAfee Associates but held onto shares which he sold in 1996 for $100 million.

John McAfee continued working on various projects and also did some lecturing, but none met with the success that he had experienced with McAfee anti-virus platform. McAfee moved to Woodland Park Colorado, and it was there that he developed PowWow, an early Internet messaging system, and VoIP product. He formed a company, Tribal Voices, to market PowWow and sold it in 1999 for $US17 million. McAfee also invested heavily in property, and when the global financial crisis hit in 2008, he was reportedly left exposed, and his net worth was reduced to reportedly four million.

John McAfee went into partnership with a microbiologist Allison Adonizio to explore the possibility of using plants to develop antibiotics. The company they formed was Quorumex and was based in Belize.

He is currently the CEO of EO of MGT Capital Investments, Inc.

The developer of the one of the world’s first anti-virus computer platform, McAfee.

John McAfee is married to Janice Dyson whom he met around the time of his flight from Belize to Guatemala. The couple resides in Tennessee.

During the 1970s McAfee developed a drug and alcohol problem for which he sought help for in the early 1980s. He attended Alcoholics Anonymous and said that he has been clean ever since.

During 2012 McAfee got caught up in a criminal investigation in Belize when his neighbor was shot and killed. He fled the country in Belize and was later arrested in Guatemala. The Guatemalan government charged him with illegal entry and then deported him the United States.