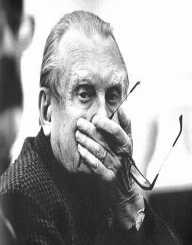 Czes?aw Mi?osz was a prolific Polish writer, poet, translator and diplomat who won the Nobel Prize in Literature in 1980. Born on June 30, 1911, he is known for his work, The World, a collection of twenty poems, which he wrote during the Second World War. After the World War, Czes?aw Mi?osz was appointed as the Polish cultural diplomat in Paris and Washington D.C before defected to the West in 1951. In 1953, Czes?aw Mi?osz wrote the anti-Stalinism nonfiction book, The Captive Mind, which book one of his classical books. Milosz served at the University of California as a professor of Slavic Languages and Literature from 1961 to 1998. Czes?aw Mi?osz was given a US citizenship in 1970. His prolific writing won him other awards like the Neustadt International Prize for Literature in 1978 and became a Puterbaugh Fellow in 1999.

Czes?aw Mi?osz was born to Aleksander Milosz and Weronika nee Kumar on June 30, 1911, in Szewtejnia, Kovno Governorate, Russia Empire currently Kedainai district, Kaunas County in Lithuania. His father was as a civil engineer and his mother a descendant of the Syriac noble family. His brother was Andrzej Milosz, who became a journalist and literary translator, would create and produce a documentary on Milosz. Czes?aw Mi?osz was fluent in English, Russian, French, Polish and Lithuanian.

Czes?aw Mi?osz was always in the middle and never identified himself as either Pole or Lithuania. He once statedthat"I am a Lithuanian to whom it was not given to be a Lithuanian," and "My family in the sixteenth century already spoke Polish, just as many families in Finland spoke Swedish and in Ireland English, so I am a Polish, not a Lithuanian poet. But the landscapes and perhaps the spirits of Lithuania have never abandoned me". Born and raised as a Catholic, Czes?aw Mi?osz later adopted what he termed as"scientific, atheistic position mostly," during his youthful l days but later returned to the Catholic faith. Milosz graduated from Sigismund Augustus Gymnasium in Wilno and enrolled at the Stefan Batory University where he studied Law.

Czes?aw Mi?osz left Lithuania for Paris in 1931. While there, Czes?aw Mi?osz was influenced by his distant cousin and poet Oscar Milosz. That same year, he collaborated with other young poets like Teodor Bujnicki, Jerzy Zagórski, Jerzy Putrament, Aleksander Rymkiewicz and Józef Ma?li?ski to form the poetic group Zagary. In 1934, Czes?aw Mi?osz published his first volume of poem and that same year received his law degree after which he spent another year in Paris for a fellowship. Czes?aw Mi?osz returned to Lithuania after the fellowship to work at Radio Wilno as a commentator.

Czes?aw Mi?osz was later dismissed for what was seen as his as leftist views or for his excessive sympathy to Lithuania. He wrote several poems, essay, and fictions, all of which were in Polish and also translated Psalms into Polish. During the Second World War, Mi?osz was based in Warsaw under the General Government of Nazi Germany.

During this period, he enrolled in underground lectures offered by  Wladyslaw Tatarkiewicz, a Polish philosopher, historian, and aesthetics. Mi?osz was appointed by the government of the People’s Republic of Poland as the cultural attaché of Poland to Paris, and Washington D.C.Mi?osz received some criticism during his appointment in some émigré circles.

Czes?aw Mi?osz was equally attacked and later censored in Poland when he defected to the West and sought for political asylum in France in 1951. He later unsuccessfully tried to seek asylum in the United States of America for several years due to the climate of McCarthyism. In 1953, Czes?aw Mi?osz published the book The Captive of the Mind, which talks about the behavior of intellectuals under a dictatorial regime. According to him those who protested such regimes were not this with the strongest mind but the ones with weakest stomachs.

Czes?aw Mi?osz noted, “the mind can rationalize anything, but the stomach can take only so much.” This book became a usual reference for conservative commentators in the United States including William F. Buckley, Jr during the Cold War. It has also vital in the study of totalitarianism. In the novel, The Issa Valley, published in 1955 and the memoir Nature Realm in 1959, Czes?aw Mi?osz talks about his childhood life in Lithuania.

Righteous Among The Nations

Czes?aw Mi?osz played an active role in the Organizacja Socjalistyczno-Niepodleg?o?ciowa "Wolno??" ("The 'Freedom' Socialist Pro-Independence Organisation"), during the Nazi Occupation of Poland by giving aid to Warsaw Jews. His brother Andrzej Mi?osz also played an instrumental role during that period helping transport the Polish Jew, Seweryn Tross and his wife Vilnius to Warsaw. Czes?aw Mi?osz, on the other hand, took them into hiding and gave them financial support. The couple eventually died during the Warsaw uprising. This help among others gained Mi?osz a medal of the Righteous Among the Nation in Yad Vashem, Israel in 1989.

Czes?aw Mi?osz finally moved to the United States in 1960 and was given a citizenship in 1970. He became a professor at the University of California, Berkeley Department of Slavic Languages and Literature in 1961. Czes?aw Mi?osz worked here until he retired in 1978 even though he continued teaching in Berkeley. Czes?aw Mi?osz was awarded the Nobel Prize in Literature in 1980, and that was when his become known to some Pole since he had not been o the country since he was banned by the Poland communist government. He returned to the country after the fall of the Iron Curtain where he lived in Krakow. He became a Visiting Walgreen Professor of Human Understanding in 1983.

Prior to his burial, there were threats of demonstrations by people who saw Czes?aw Mi?osz as an anti-Polish and anti-Catholic and the fact that he had signed a petition in support of gay and lesbian freedom of speech and assembly. To curtailed his, Pope John Paul and Czes?aw Mi?osz confessor issued a statement that Czes?aw Mi?osz had been receiving the sacraments. Late in his life, Mi?osz hired a Lithuanian-language teacher to improve on his speaking and writing skills. Czes?aw Mi?osz explained this last move, saying it may be the language spoken  in heaven adding that "Language is the only homeland."

Czes?aw Mi?osz published dozens of poetry works during his career including, Trzy zim (Three Winters); 1936, Ocaclenie (Rescue), 1945, Swiatlo dzienne (The Light of Day), 1954, Traktat poetycki (A Political Treatise), 1957, Krol Popiel I innewiersze (King Popiel and Other Poem), 1962 and Gdzie sloncewschozi i kedyzapada(Where the Sun Rises and Where it Sets), 1974. Others are Hymn o Perle (The Poem of the Pearl); 1982, Nieobjeta ziemia, (The Unencompassed Earth, 1984, drugaprzestrzen(The Second Space); 2002 and Wiersze ostatnie (Last Poems) in 2006 among several others.