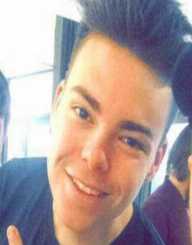 The power of social media and its potentials cannot be underrated in the modernised world. Although it has its problems, the efficient use of social media platforms has many advantages than the disadvantages. One may get bored with hearing this over and over but, social media has propelled many talentsinto the limelight. One of such persons who has taken advantage of social media is Isaac Nakash.

Born on July 8, 1996, Isaac Nakash is an up and coming social media star. Known as izzydogman on Instagram, he is striving to achieve greatness with his video postings. Isaac’s videos are made up of pranks played on mostly on his girlfriend. These pranks contain some humorous sides that followers and fans find intriguing and worth watching.

Isaan Nakash was born on July 8, 1996, in California, United States of America. He has since 2013 been dating a YouTube vlogger Rachel Levin. She has appeared in several of Isaac videos and photos. Rachel has been supportive of Isaac’s quest for stardom through social media. She has been seen in some of Isaac’s videos serving as a makeup artist for his videos.

Isaac Nakash on the other hand sometimes serves as a photographer for Rachel, and it seems the two are enjoying a beautiful love life. There are rumours that the two will soon get married and they recently posted a video celebrating their three years of dating on YouTube.

Isaac Nakash just like others had a humble beginning with his social media campaign and gained attention as he posted several stunning videos and pictures. His relationship withYouTuber sensational, Rachel Levin shot him to stardom. Rachel who has almost 12 million YouTube subscriptions has undoubtedly played a role in Isaac’s social media career. Most of Rachel’s videos featured Isaac, and that set the ground rolling for him also to chalk a name for himself. Isaac who uses the pseudonym izzydogham on Instagram currently has over 630,000 followers on Instagram. On YouTube, he now has almost 1.5 million subscribers on his Isaac live channel.

Isaac Nakash has posted several exciting prank videos, but the topmost of all is the‘One Million Orbeez in Girlfriend’s Car Prank’. The video became very popular and generated lots of likes and over seven million views. That aside the video ‘Uber Prank on Girlfriend’ generated over 3 million views while ‘Pinning Balloons on Random People Prank! (Gone Wrong)’gained over a million views and several likes. Isaac has left nothing to chance as he continues to post fascinating videos. He also has favorite videos like Bad Santa Public Prank, Worst Bartender Ever and Worse Lifeguard Ever which also had several likes and views. Isaac is also on Vine as Izzydogham with over 200,000 followers.

It is evident that not everyone likes to be pranked and definitely, there are awkward moments for prankers. Isaac Nakash had one of such experiences when he pinned a balloon to a man, and with the outcome, your guess is as good as mine. The man embarrassed him by yelling at him, and he had to apologise to prevent creating a big scene. Isaac also got an iPhone screen smashed during the shooting of Ultimate iPhone  Drop Test into Swimming Pool as they miscalculated the landing of the phone from a drone.