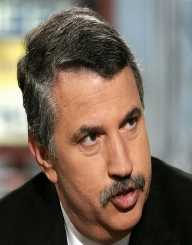 Thomas Friedman was born on July 20, 1953. He is a three time Pulitzer Prize winner. He is known to contribute columns for The New York Times. He has written a lot of articles on foreign affairs, environmental matters, international trade, and globalization. His books mostly talk about global politics. He has sold bestselling books such as ‘The World is Flat’ among others. He is also a guest in shows such as ‘Meet the Press,’ ‘Morning Joe’ and ‘Charlie Rose.’ He also served as a visiting lecturer at Harvard University.

Thomas Friedman was born on July 20, 1953, in Minneapolis, Minnesota. He was born to Margaret Blanche and Harold Abe Friedman. He was brought up alongside two siblings, Shelly and Jane. He attended a Hebrew School until his Bar Mitzvah. He went ahead to attend St. Louis Park High School. While a student he used to write articles for the school’s newspaper. From a young age, he was so much interested in becoming a professional golfer. His love for golf led him to work for a local country club in the year 1970. After high school, he joined the University of Minnesota and then moved to Brandeis University. In 1975, he graduated with a degree in Mediterranean studies.

Thomas Friedman later joined St. Antony’s College at the University of Oxford through a Marshall scholarship. He earned an M. Phil in Middle East studies from the college.

Thomas Friedman joined the London Bureau of United Press International after college. He lived in Beirut from 1979 to 1981 when he was dispatched to the country to cover a war. In 1981, He was recruited by The New York Times. The New York Times also sent him to Beirut in 1982 to cover Israeli’s invasion of Lebanon. In 1984, he moved to Jerusalem where he was appointed as the Times Jerusalem Bureau Chief. He held the post for four years.

In 1989, Thomas Friedman authored the book ‘From Beirut to Jerusalem.’ The book became a bestselling book as it was popular among the masses. In 1992, after the appointment of President Bill Clinton, he became the ‘Times’ White House correspondent. He wrote many columns on foreign policy and economics. Later he became the foreign affairs correspondent for The New York Times. In 1999, he wrote the book ‘The Lexus and the Olive Tree.’ In this book, he gave his views on globalization. After the 9/11 attacks, he focused his writing on the Middle East and Terrorism. The coverage on terrorism and the Middle East won him several awards.

In 2002, Thomas Friedman met Prince Abdullah of Saudi Arabia and beckoned him to stop the Arab Israeli conflict. His approach to Prince Abdullah led to the proposal of the Arab Peace Initiative. He created a lot of documentaries from 2003 to 2007. The documentaries included ‘Searching for the Roots of 9/11’, ‘Does Europe Hate us?’, ‘Addicted to Oil,’ ‘Green: The New, Red, White and Blue’ and ‘The Other Side of Outsourcing.’ In 2005, he penned the book ‘The World is Flat.’ In 2008, he wrote the book ‘Hot, Flat and Crowded.’ This book focused on the issue of global warming. In 2010, he wrote a lot of columns on politics, and he also wrote the book ‘That Used to be Us: How America Fell Behind in the World It Invented and How We Can Come Back.’

In 1978, Thomas Friedman married economist Ann Bucksbaum with whom he has two daughters, Orly and Natalie. The family resides in Bethesda, Maryland.