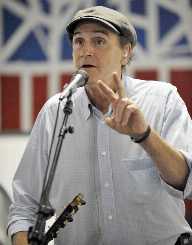 James Taylor was born on March 12, 1948, in Massachusetts, United States of America. He was born to Dr. Isaac Taylor who was a resident physician and Gertrude Woodward who was an aspiring opera singer. He was brought up alongside four siblings, that is, Alex, Hugh, Livingston, and Kate. When he was three years old, his family moved to Chapel Hill in North Carolina when his father became the dean of the Medical School at the University of North Carolina.

In 1963, James Taylor joined Milton Academy. At the school, he met guitarist Danny Kortchmar. At the age of fourteen, he wrote his first song. He later formed the band ‘The Corsairs’ with his brother Alex. In 1965, he got admitted at McLean Hospital, Massachusetts when he began suffering from depression. He was later discharged and moved to New York City.

In 1966, James Taylor founded the group ‘The Flying Machines’ with Joel O’ Brien and Kortchmar. The group played songs that he wrote while he was in hospital. These songs included ‘The Blues is Just a Bad Dream,’ ‘Knocking Round the Zoo’ and ‘Don’t Talk Now.’ The group later released the single ‘Brighten Your Night with May Day’ which was written by James. The song however was not a success. In 1967, the band broke up. He later got addicted to heroin. He was forced to move to London in order to recover. In London he reached out to Peter Asher who was working for Apple Records.

In 1977, James Taylor signed a contract with Columbia Records. He released the album ‘JT’ with the label. In the 1980s he had so many problems that he took a break from music. In 1997, he released the album ‘Hourglass’ which saw him boost his music career once more. In 2002, he released the album ‘October Road’. In 2008, he released ‘Covers’. The albums were both a success. In 2010, he began the Troubadour Reunion Tour with Carole King and members of his original band. At President Obama’s 2nd inauguration he performed ‘America the Beautiful’.

James Taylor is a five time Grammy Award winner. In 2004, he received the George and Ira Gershwin Award for Lifetime Musical Achievement.

In 1972, James Taylor married singer-songwriter Carly Simon with whom he has two children, Ben and Sally. In 1983, they divorced. In 1985, he married actress Kathryn Walker they, however, got divorced in 1996. In 2001, he married Caroline Smedvig with whom he has twin sons, Rufus and Henry. They currently live in Massachusetts. He has a net worth of sixty million dollars. He is presently sixty nine years old.