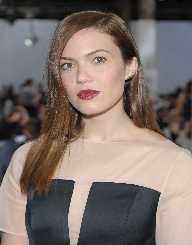 Mandy Moore graced the national fame platform since she started to sing the National Anthem. It became a norm in her locality till she was nicknamed ‘National Anthem Girl.’ At 15 years of age, Mandy continued to improve on her reference voice as well as acting. She rose to stardom with her first debut single titled ‘Candy’ which cemented the Billboard Hot 100 hits. At 14 her first record ‘So Real’ was released when she signed a Sony Music contract. She ruled the world of fame with other rising stars such as Christina Aguilera and Britney Spears.

On April 10, 1984, Mandy Moore was born in Nashua, New Hampshire, United States. After a few months, Moore and her family moved to Orlando, Florida. At the age of six, Mandy wanted nothing more than to be a great performer. Her determination made her go to Oklahoma dance tour. There and then Mandy was amazed by one girl who performed live on stage. She liked the audience reaction and how the little girl sang with vigor. She went back home and took her small karaoke machine which she used to belt out every song.

She intoned her voice with the ‘Wind Beneath My Wings’ song by Bette Midler. Her parents thought their little girl was just going through a phase that will surface afterward. To their shock, they saw an immense talent in her and opted to take her to singing lessons.

Mandy’s training came to pay off after performing in nearby music theaters. She started with ‘The Star-Spangled Banner’ song which she used to sing at every angle. Moore was later approached by countable record producers who gave her a chance to showcase her talent. Interestingly she was given a demo which led to her recording agreement.

In 1999 Mandy Moore released her very first album titled ‘So Real’ and quickly went viral. Her first hit in her single album, “Candy,” received positive reviews around the country. Her childhood experience in Orlando didn’t mean that she would go to a nearby Disney Production show. In fact, she effortlessly worked hard on how to improve her singing as a career. She encouraged herself that if she doesn’t manage to hit her target, then theater would be her resting place. She once confessed that she loved any song, but she loved to listen to Mariah Carey, Lauryn Hill, and Madonna lyrics. Her state in the music industry can be illustrated in her titles such as ‘What You Want’ and ‘Quit Breaking’ My Heart.'

Mandy Moore continued with her onscreen talent with movies like Because I Said So, How to Deal and Licensed to Wed. She appeared in singing and speaking voice for Rapunzel ‘Tangled’ animation. In 2014 she performed ‘I See the Light’ song in the Sofia the First Disney show. Mandy got stuck in the Disney family that made her voice one of the leading characters in the Sheriff Callie’s Wild West Disney animation. Mandy was granted a recurring role on the FOX series and the NBC’s new series titled ‘This Is Us’

Moore’s talent made her reach the highest levels by receiving more recognition. From 2000 to 2003 Moore garnered awards such as The MTV Movie Award, Teen Choice Award, and Young Hollywood Award among others.

Apart from her music and acting career, Mandy Moore loved English while in school. Her least favorite subjects were mathematics. Either way, she also represents the Neutrogena products by advertising and appearing on company’s cover. Moore outspoken trait gave her a chance to have a simple kind of life. She hates drugs and alcohol as opposed to the disadvantages it brings to an individual. From 2009 to 2015 Ryan Adams married Moore, but Adams filed for divorce after few years. Moore dated Zach Braff in 2006 and parted ways after a short dating life. She is currently dating Taylor Goldsmith a Dawes singer.