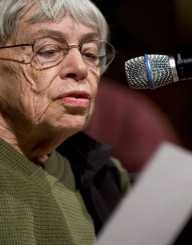 American author Ursula K. Le Guin was born was born on the 21 October 1929 in Berkeley, California to Alfred L. Kroeber and Theodora Kracaw Kroeber. Her parents were both anthropologists, and she was the youngest of four children born to the couple. Her brothers were Karl, Theodore, and Clifton.

Le Guin’s mother was also a writer and her book Ishi in Two Worlds was published in 1960. Her father was an expert on Native American culture in California. Growing up in a cultured home, Le Guin had access to books such as The Golden Bough and became fascinated by mythology at a young age. She was also interested in science fiction.

After graduating from high school, Ursula K. Le Guin enrolled at Radcliffe College (1951). She then studied at Columbia University (1952) where she did an MA in Romance Literature of the Middle Ages and Renaissance. Additionally, she won a Fulbright fellowship which enabled her to study in Paris, France.

Ursula K. Le Guin met her husband; also a Fulbright scholar, Charles Le Guin on the ocean liner travelling to France and they got married in Paris. When they returned home,  Charles Le Guin took up a position as a history lecturer at Portland State University and Le Guin concentrated on raising their children. She began writing novels and in the early 1960s, tried her hand at genre fiction and chose science fiction.

A collection of essays Words Are My Matter: Writings about Life and Book 2000-2016 won a Hugo Award. Throughout her writing career, Le Guin published over 20 novels, a number of poetry collections, dozens of short stories and essays, children’s books and translations.

Ursula K. Le Guin was the recipient of numerous literary awards including a World Fantasy Award, Hugo awards, Nebula awards, and Locus awards. She was a Pulitzer Prize for Fiction finalist in 1997 for Unlocking the Air and Other Stories.