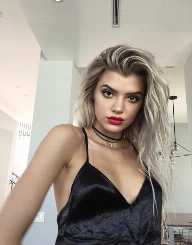 Alissa Violet started her career as a model with a world-renowned modeling agency, Next Model.

Although her social media accounts were active in 2013, it wasn’t until early 2015 that she started making the most of her Instagram and Vine accounts. She then moved to Facebook and Twitter as well.

Alissa Violet currently boasts over two million followers on Instagram and over 600,000 followers on Vine. She collaborates with other social media personalities like Jake Paul, Logan Paul, and George Janko, amongst others. Although she doesn’t yet have the same following that they have, her audience is growing very regularly.

Alissa Violet moved from Ohio to Los Angeles to pursue her social media career. Her estimated network is approximately $450,000, which can only grow as her popularity continues to increase.