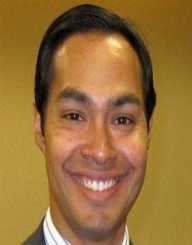 Julian Castro is an American politician and a member of the Democratic Party. Born on September 16, 1974, he served under President Barrack Obama as the 16th United States Secretary of Housing and Urban Development from 2014 to 2017. From 2009 until 2014, he was the mayor of San Antonio. Julian has announced his intentions to contest the 2020 US Presidential election.

Julian Castro was born on September 16, 1974, in San Antonio, Texas to Jessie Guzman and Maria Castro. Maria was a Chicana political activist who helped in founding the Chicano political party La Raza Unida. In 1971, she unsuccessfully ran for the San Antonia City Council. Jesse was also a political activist and a retired mathematics teacher.

Castro has a twin brother Joaquin Castro, who is currently serving in the United States House of Representative. Maria’s involvement in politics influenced her children's future political career. At the age of eight, his parents separated.

Julian Castro received education at Thomas Jefferson High School, in San Antonio. Active in sports, he joined the school’s basketball, football, and tennis team. After graduating in 1992, Trinity University offered to give him admission to join the university’s tennis team. He, however, rejected and enrolled at Stanford University, where he graduated in 1996 with a bachelor’s degree in political science and communications.

A year later, he entered Harvard Law School, graduating with a Juris Doctor in 2000 with his brother. The two brothers then worked for the law firm Akin Gump Strauss Hauer & Feld. In 2005, they opened their law firm.

Julian Castro won elections to the San Antonio City Council in 2001 at age 26, having received 61 percent of the votes. This made him the youngest city council member in the history of San Antonio, beating the record of Henry Cisneros, who entered the council at age 27 in 1975. Castro served at the council until 2004.

In 2005, he unsuccessfully contested for the mayor of San Antonio, as he was defeated by retired judge Phil Hardberger who won by 51.5%. Four years later, Castro contested again and this time won by 56.23% of the votes. To ensure his victory, he had hired Christian Archer to run his campaign. Archer ran the 2005 campaign of Hardberger. His success made him the fifth Latino mayor of San Antonio.

He retained the seat in 2011 with 82.9% of votes and again in 2013 with 67% of the votes. In 2012, he delivered the keynote address at a Democratic National Convention in Charlotte, North Carolina, gaining him national attention. This also made him the first Hispanic to deliver such a speech.

Julian Castro introduced various policies as the mayor of San Antonio including the SA2020, which listed a set of goals to be achieved in San Antonio in 2020. The list contained the collective vision of the people of San Antonio. That same year, he established the Café College that offered college guidance to students in the area.

In 2014, President Barrack Obama appointed Julian Castro as United States Secretary of Housing and Urban Development. Senate confirmed his appointment on July 9, 2014, and he started work on July 28, 2014. He, therefore, resigned as mayor of San Antonio on July 22, 2014. Ivy Taylor replaced him at the council.

Before the 2016 Presidential election, Castro was marked as one of the favourable vice presidential candidates for Hillary Clinton. When asked if Castro could be her pick, Clinton remarked, "I am going to look hard at him for anything because that's how good he is. However, Castro was found to have violated the Hatch Act, after a finding by the U.S. Office of Special Counsel for commenting on the 2016 election during an official interview. An error he admitted.