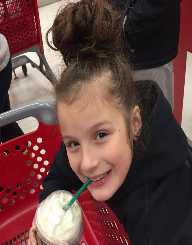 With the current social media craze, lot more celebrities are being discovered each day. The youth is leaving no stone unturned in their quest to become famous using social media. It is even more surprising that not only the teenage and older are exploring the media but also, minors. Hayley Noelle is one of these minors using social media to let the world go gaga. Born on September 2, 2008, she has become a social media phenomenon and is now a YouTube celebrity.

Best known with Hayley Noelle, she gained her popularity through the YouTube family blog channel Bratayley. The eight-year American has never been intimidated by her age as she keeps thrilling subscribers of Bratayley nothing but the best. The channel currently has over 4.1 million subscribers. On the channel, the kids post a video of their daily activities on their vlogging channel. Aside from Bratayley, Hayley Noelle also has her own YouTube channel, elloNyah with over 600,000 thousand subscribers. She uses that channel to post videos in fashion and lifestyle, cooking, dance, and gymnastics.

Hayley Noelle was born September 2, 2008, in Texas, the United States of America to Katie and Billy Noelle LeBlanc. Both parents are of white descent. Hayley Noelle has two other siblings Caleb and Annie. Caleb, however, died of hypertrophic cardiomyopathy at age 13 in 2015. She was previously homeschooled but later chose to be in a private school, Indian Creek.

Hayley Noelle once had a surgery to improve his eyesight. When not making videos online, Hayley enjoys cookingandpractising gymnastics and is now at level three. She picked that interest from her elder sister who is also a gymnast. Mac and cheese are her best food and prefers the colors purple and white. She has also made friends on YouTube and currently met one of her favorites YouTube personality Rosanna Pansino. She is also part of her parent's channel OMMyGoshTV with other kids.

Hayley Noelle was first introduced to social media through her sister, Annie’s channel, acro anna in 2008. Annie used the acro anna channel to post her gymnastic videos. Hayley Noelle has since become a social media rising star through the family channel Bratayley. She has gained lots of love from the video of her daily activities. The young talent has proved that gaining fame is not by age but by talent. She is currently working hard enough to improve on talent and skills to make it to the top.