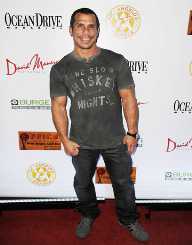 Danny Wood grew up in the suburbs of Boston in the American state of Massachusetts. He was born on the 14th day of May in the year 1969. His parents were Elizabeth Wood and Daniel Williams. Danny Wood showed traits of brilliance in his early years and raked up the As with ease through middle school.Danny was a church singer, who also did well in physical sports.

Danny Wood's  best friend from childhood was Donnie Wahlberg, and he was the one who got him around as a member of New Kids on the Block. This teenage boys’ band was one that hit stardom in the decade of the 1980s, As Danny Wood leaped through his adolescent years, he tried academic forays by enrolling in Boston University. However, Danny opted for music after struggling to make both pursuits work in one semester.

While some saw Danny's decision as a gamble, it should be one regarded as a good payoff as the group’s second album hit critical acclaim in 1988. The “I’ll be loving you forever” crooner along with his bandmates raked in millions of dollars. They did this as they surpassed the 80 million mark in album sales.

The split came as the 1990s rolled on and Danny Wood worked on his trademark. He became a solo act with some albums released. However, Wood did not make the impact his group had in their early years.

The NKOTB was reputed in their height as one of the best known around the globe. Danny Wood’s other acolytes included Jordan Knight and Jonathan Knight, Donnie Wahlberg as well as Joe McIntyre. The first two were blood brothers. Danny Wood swam in the success of his boyhood group that came with humongous fame, hit singles, global tours as well as money and the girls Danny was also reported to have dated the Hollywood A-lister, Halle Berry at some point in his life.

Danny Wood shifted gears and launched out as an actor while Joe became a solo artist just like Jordan. Danny also tried his luck on the spotlight and worked on a new album titled the Second Face. This solo work was a different flavor from what the audience was used to, and evidently, it showed that Danny Wood had worked on his delivery.Danny songwriting and hue of sound were such that he worked hard to fine-tune. The new lines from Danny Wood were heartfelt and grounded in the womb of pop music with smooth timing and rendition of melody. It was a world apart from the feel and sounds of NKOTB. The album was a take on Wood's life before and in the aftermath of his erstwhile group with semblances and invites that showed as an ode to love.

It was a mix of self-expression and a bold take to stamp an identity.Danny Wood launched out in the direction of street creed themes, life, and death. Death came in to play because Wood lost his mother during the interlude. Danny Wood also made a play of suburban life demands in addition to interracial relationships. Wood handled all of these with a pinch of humor while taking into consideration all the contemporary appurtenances of millennial mentality.

Danny Wood's  story is incomplete without a mention of Damage Records. He set this up in the year 1994 after his group went their separate ways. Wood went to work on some songs of his own. Danny Wood  was featured in the 2002 film titled “Tequila Express.” This was a movie that also starred Christopher Atkins. In his business forays, Wood served in a plane charter firm called  Halcyon Jets as vice president.

Danny Wood was eager to join the group when his band reunited in 2008. They lent a supporting hand to Susan G. Komen organization. This organization was in the forefront of the fight against breast cancer. Danny’s mother was a victim of this ailment. Danny Wood happily bought – into the idea of the NKOTB reunion and 2013 Packaged Tour. They featured alongside 98 Degrees and the near-immortal Boyz II Men.

The favorite song that Danny Wood prefers in his performance depends on the tour that he is involved in at the time. Wood looks to the crowd and will perform whatever will turn the crowd on and make them ecstatic. On influences, Danny Wood adores Ed Sheeran as well as Jason Mraz and Christian Peri, to complete the new school. Talking about the old school, he mentions The Bee Gees, The Eagles, The Stylistics as well as Hall & Oates.

Danny Wood's  attraction to Hip Hop is the basis for choosing this genre for his working out sessions, and he listens to a wide variety of artists in this league.

Danny Wood got married to Patricia Patty Alfaro in December 1997 but the pair divorced by March 2006. His first son, Daniel Jr was from an earlier relationship with Elise Stepherson. His union with Patricia produced Anthony and two daughters, named Chance, who was adopted from Russia and Vega.