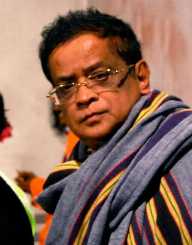 Humayun Ahmed was a Bangladeshi writer, playwright, screenwriter, and filmmaker. He became a pioneer of modern science fiction in Bangladesh and a voice to reckon with in the Dhallywood film industry.

Humayun Ahmed was born into the family of a Bangladeshi police officer and writer, Fayzur Rahman Ahmed and his wife, a Bengali writer, Ayesha Fayzur. Humayun Ahmed was born on the 13th of November 1948 in Kutubpur village of Netrakona, Bangladeshi. Humayun's  two younger brothers Muhammed Zafar Iqbal and Ahsan Habib are also famous writers and artists in Bangladesh. Ahmed also had three sisters, Sufia Haider, Momtaz Shahid and Rukhsana Ahmed.

Humayun Ahmed attended several schools due to his father’s official position. Many of these experiences contributed to his writings in later years.

In 1971, while he was still a student Humayun Ahmed’s father was killed in the Liberation war by the Pakistani Occupation Army. Humayun Ahmed's father’s murderer walked away free due to lack of evidence.

Humayun Ahmed wrote his debut novel Nondito Noroke (In Blissful Hell) in 1972. Upon graduation from the university, Ahmed lectured for six months in the Bangladesh Agriculture University. Humayun Ahmed then returned as a lecturer to the Dhaka University in the Department of Chemistry. Sometime later Ahmed went to North Dakota State University in the United States to obtain his Ph.D. in Polymer Chemistry.

Humayun Ahmed retired from teaching in the Mid-1990s to devote himself entirely to his writing, filmmaking and television drama career.

Humayun Ahmed had already received much critical acclaim and recognition for his debut novel. Many of his works were drawn from his own life’s experiences. Ahmed also wrote series surrounding a recurrent character. The most notable of these characters include; Himu, for which he wrote fifteen novels and Misir Ali, for which he wrote ten stories.

Humayun Ahmed went on to write over two hundred books, both fiction and non-fiction. All his writing works became bestsellers in his country. Many of Ahmed's works were translated into various languages around the world. Many were also included in the syllabus of several colleges and universities.

Humayun Ahmed made his debut in television drama with Prothom Prohor (First Moment), in 1983. After this, Humayun continued to write several award-winning movies of different genres. Ahmed wrote drama series, comedy series, historical dramas, and urban drama series. Of Ahmed, most notable works were the ones he wrote based on the Liberation War. These included: Aguner Poroshmoni and Shyamal Chhaya. The last film created by him was Ghetuputra Kamola. It was also a huge success.

Humayun Ahmed was also a lyricist, and he wrote songs for some of his films and plays including Ami Aaj Bhejabo Chokh Somudrer Joley, Chandni Poshor Ratey, and Amar Ache Jol.

The theme that ran through many of his stories, portraying relatable life experiences, quirky characters and easily understood language made him a favorite across the board.

Humayun Ahmed married his first wife, Gultekin Khan in 1973. They had four children together, named, Nova, Sheela, Bipasha, and Nuhash.

In the 1990s Humayun began having an affair with television actress and friend of one of his daughters, Meher Afroz Shaon. Ahmed divorced his wife in 2003 and married his mistress in 2005. Ahmed had two more children through her, named, Nishad and Ninit.

Humayun lived in and loved Gazipur. In 1987 Ahmed got his estate in which he spent most of his time while in Bangladesh. The property was a fourteen-acre estate located near Pijulia village, in Gazipur Sadar Upazila of Gazipur District and called Nuhash Polli. Nuhash is the name of his first son. Ahmed had several statues sculpted on the estate and planted several medicinal and fruit-bearing trees from around the world.

Humayun Ahmed, the literary legend of Bangladesh suffered from colorectal cancer. A cancerous tumor was discovered in his colon during a routine medical check-up.

Ahmed began to receive treatment at the Memorial Sloan-Kettering Cancer Centre in New York on the 14th of September 2011. While in treatment, he continued to write. It was then Humayun wrote the novel Deyal (2011), based on the life of the first Bangladeshi president.Ahmed was also appointed special adviser of the Bangladesh Mission to the United Nations in January 2012.

Humayun Ahmed died on July 19, 2012, at the Bellevue Hospital in New York City. He was buried in his beloved estate Nuhash Polli in Bangladesh.

Critics described Humayun Ahmed's work as impactful, profound and fruitful literature. Ahmed had been described as a cultural legend in Bangladesh and had often been referred to as Bangladesh’s Shakespeare.
Of his several awards, Ahmed first received the Lekhak Shibir Prize in 1973 given to recognize liberal and progressive writers.

In 1981, Humayun Ahmed won the Bangla Academy award in 1981 for creative genius and overall contribution to the Bengali language and literature.

Humayun Ahmed continued to win several awards for his contributions to the movie and literary industry. Humayun Ahmed also got recognition and award for his work as a lyricist. In 1999 he was awarded Bachas Awards for Best Lyrics in Srabon Megher Din.

In Humayun Ahmed's honor, the Exim Bank of Bangladesh and entertainment magazine, Anyadin collaborated to set up and award program. The Humayun Ahmed Sahitya Puruskar is given to two writers November 12 every year.