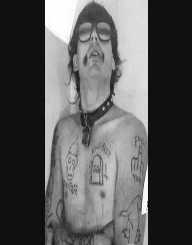 GG Allin was christened Jesus Christ Allin when he was born in Lancaster, NH in August 1956 and on the 29th day of that month. He was born in deplorable circumstances and grew up in a cabin that had no water and electricity. His father was Merle Colby Allin, Sr. and his mother, Arleta Gunther.

Allin’s father had notoriety for socializing and was unstable. His uncomfortable upbringing could be identified as the reason for his character slur. His parents divorced on his mother’s prompting, and he moved with his mother to Vermont. He grew up in the care of his stepfather and mother in Johnsbury East Street.

GG Allin’s school years were unremarkable as he performed poorly academically and had to make do with special education arrangement. He was a bully target in school and was a misfit around other students.

In his mid-teens, he formed a band with Pinky, his bother. The band was named “Little Sister's Date.” They reprised the popular hard rock songs of the time but eventually fell apart within the first year.

GG Allin went solo in 1980 and released his debut attempt with a studio album, which he titled aptly as “Always Was, Is And Always Shall Be.” In the midst of the decade, he churned out albums such as “The Texas Nazis,” “The Scumfucs” and “The Cedar Street Sluts.”

He was already by now a leading light in the hardcore underground rock scene. His second studio work was “Eat My Fuc,” and it debuted under the Blood Labels fold. The themes he explored here were largely sociopathic in the extreme.

The album Hated in the Nation was released in 1987, and it was a compilation work. This time, it was released under the fold of ROIR, which was a New York City enterprise. This is what gave him his first international acclaim.

GG Allin completed his third release with the studio album “You Give Love a Bad Name,” in the year 1987. The lyrics were shocking, and this effort was a turning point in his choice of vocal tone.

The record label, Homestead Records released his next studio album, which he aptly titled “Freaks, Faggots, Drunks and Junkies” in 1988. He was on the instruments and voiced the vocals for this work. He decided to go the compilation route again in 1989 with “Banned In Boston.”

He also released “The Troubled Troubador” as an extended play later on. He was in France to release Murder Junkies in the year 1991. He used musical tracks interspersed with the spoken word format in this album.

Enigma Records was his next port of call in 1993 with the release of the album, “Anti-Social Personality Disorder – Live.” His final album from the studio was also released in the same year and titled “Brutality and Bloodshed for All.”

GG Allin was one epitome of the degenerate who was a lurking danger and rebellion on the move. His stagecraft was shocking, to say the least, and rounded notorious. He vaunted self-mutilation, indecent exposure and gloried in audience harming.

His life and work was a symbol of sexual exploitation, substance abuse, lawlessness and outright violence. His music was anti-authoritarian, and he crudely represented the unconventional and socially unacceptable.

GG Allin had 52 arrests in his lifetime over acts of indecency and assault. He was hostage to drug-dependency and hard drugs. Some are quick to allude to his troubled childhood as the basis for his warped conduct. Others pointed at possible personality disorder syndrome

While there is no doubt that he was a magnet for the crowd and large audiences, not a few had reservations about his anti-social antics and outright demagoguery.

GG Allin is referred to as the most alluded degenerate in the history of Rock and Roll. Some of his stage vices included defecating and smearing his audience with feces while eating same on stage.

He prompted his audience to live oral sex on stage while performing live. Urinating on stage was a common vice he stamped as his signature. While he would strip naked on stage, he will immolate himself and put his audience at risk.

He widely spoke of killing himself, and when he was released from jail one time, the world looked forward to seeing him commit suicide on stage. He played with setting himself alight, and at other times, he would go vague on how this will happen.

GG Allin married Sandra Farrow in the year 1980, but they separated and had a divorce in the year 1986. As the decade wounded down, he got involved with Tracy Deneault. Tracy was from Texas and a Garland native. Though she was a teenager, she had a baby girl from GG Allin in 1986. Her daughter was named Nico Ann Deneault.