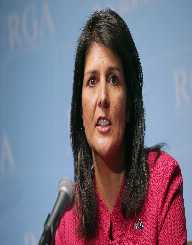 Nikki Haley was born in 1972 as Namrata Randhawa in South Carolina, the United States. Her name became Nikki, as her family always called her that. Her family is of Indian descent, and this word means “little one.” Her parents both come from India.

Nikki Haley'S father Ajit Singh was a professor of agriculture, and mother had studied law in a university in Delhi. Initially, they migrated together to Canada, and then to the United States, to South Carolina. There Haley’s father worked as a professor at Voorhees College, and mother was a teacher in public school in a city Bamberg for several years.

After teaching for seven years, she opened a store for clothes in 1976, called “Exotica International.” Haley has two brothers and one sister.

At the age of five, Haley entered in a contest “Miss Bamberg,” which usually chooses a white and black queen. As Haley did not fit any of those categories, she was asked to leave the contest.

Nikki Haley got her first work experience very early, at the age of twelve. She was helping her mother in the Exotica International store with the bookkeeping. Later she started studying and graduated the Orangeburg Preparatory Schools successfully, and entered the Clemson University to study accounting. She graduated with a bachelor degree.

After graduating from Clemson University, Nikki Haley started working in the FCR Corporation. This was a recycling company. Nikki worked in the waste management department there. Soon after that, in 1994, she decided to leave to work in her mother’s group. She started working there as a chief financial officer.

This business developed very quickly and successfully, and to this day Exotica International is known as a multimillion-dollar worth company.

She is also participating in work for Lexington County Sheriff’s Foundations; Medical Foundation. She is the president of the National Association of Women Business Owners and several others.

Nikki Haley was elected over Larry Koon to be one of the South Carolina House of Representatives in 2004. She represented the Lexington County. Haley was the first Indian-American to be elected to this position. Later in 2006 and 2008, she was re-elected for the second and third term respectively.

In 2005 Haley was elected to the South Carolina General Assembly. Her focus was mainly on lowering taxes. The exception was a cigarette surtax, where she voted for the raise of taxes. Another Haley’s focus is on teacher salaries.

Even though Haley’scomes form a family of immigrants, she firmly stands for enforcing immigration laws. Regarding abortion views, she is staunchly pro-life and wants to restrict abortions.

Running for the Governor

In 2010 Nikki Haley ran for the Governor of South Carolina. She was elected the Governor. In the re-election in 2014 Haley was again elected as the Governor.

Initially, she was planning to work until the end of the term, until 2019, but she decided to resign sooner. She left in 2017, to work as the United States Ambassador to the United Nations.

Ambassador for the United Nations

Nikki Haley was nominated for the Ambassador position by Donald Trump in 2016, and the nomination was sent to the Senate in 2017 as he became the President. After four days she was confirmed to become the Ambassador.

Her most recent publicly known focus is on the State of Israel. This has been her interest for several years, already noticed when she was elected the Governor of South Carolina in 2010. In March of 2017, a report was published, that she reacted strongly. It was a report about Israeli practices towards the Palestinian people.

This report was explaining the initiative against the oppression of Palestinian people by the Israeli, and the reaction of Haley to it surprised the United Nations analysts very much. Nikki Haley requested it to be withdrawn as soon as possible. Antonio Guterres, the General Secretary of the United Nations, performed the withdrawal.

Nikky Haley is a Sikh. She got married in 1996 to Michael Haley. Michael Haley is a National Guard in the South Carolina Army. He had been deployed for a year to Afghanistan in 2013.

They have two children, a son, and a daughter, Nalin, and Rena. Rena is currently studying at Clemson University, the same which her mother attended and got a bachelor’s degree in accounting.