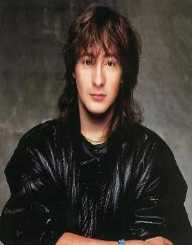 Julian Lennon is an English musician who is best known as the son of John Lennon and for inspiring The Beatles’ songs, Lucy in the Sky with Diamonds and Hey Jude.

Julian Lennon was born on 8 April 1963 in Liverpool as John Charles Julian Lennon. His parents’ were Cynthia née Powell and John Lennon. Lennon’s father was the famous singer-songwriter John Lennon who was one-quarter of the band, The Beatles. Lennon inspired his father to write the hit song, Lucy in the Sky with Diamonds. Lennon drew a picture of a girl in his class, named Lucy, amongst the stars in the sky. The song reached number one on the Billboard charts. Lennon also inspired his father to write the song, Good Night, which appeared on The Beatles self-titled album.

John Lennon wrote the song as a lullaby. A third Beatles song is linked to Lennon. Paul McCartney wrote a song called, Hey Jules, for him during the divorce of his parents. The song would eventually become The Beatles hit, Hey Jude. Lennon’s parents’ relationship was complicated. His father had been violent to his mother and was often unfaithful.

His parents divorced in 1968 with Julian living with his mother. He did not speak with his father for years and only reconnected with him when John Lennon briefly split with Yoko Ono in the 1970s. During this period Lennon’s father introduced him to music, buying him a guitar and drums. Lennon’s father was shot dead in 1980 and excluded his son from his will. Lennon challenged this legally and won access to his father’s estate.

As well as inspiring three Beatles’ hits, Lennon appeared on his father’s song, Ya-Ya, while only eleven. Lennon launched his music career in 1984 with the album, Valotte. The album charted in the top twenty of both the American and British album charts. His first single, Too Late For Goodbyes, was even more successful, reaching the top ten in Britain and America and number one in the Billboard Adult Contemporary chart. The second single from the album, also called Valotte, also reached the top ten in the American charts. A second album was released in 1986, The Secret Value of Daydreaming. Critics very poorly received the album. It did manage to chart in the top forty in the U.S.A album chart. The following year Julian Lennon appeared alongside, Roger Daltrey, John Hurt and Billy Connolly in, The Hunting of the Snark, a musical performed in London’s Royal Albert Hall.

His 1989 album, Mr. Jordan, failed to chart in Britain and it was his last album to chart in the top one hundred in America. His 1991 effort, Help Yourself, enjoyed slightly greater success, the song, Saltwater, reached number six in Britain. Julian Lennon released a further two albums, Photograph Smile, and Everything Changes, but neither enjoyed commercial success. Lennon has also held exhibitions of his photography, the first being held in 2010.

Julian Lennon lives in Monaco. He has been engaged twice but never married.