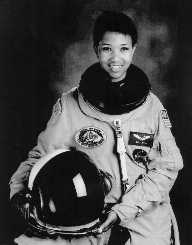 Dorothy Green and Charlie Jemison had a daughter and a son. Then Mae Carol Jemison came along to the family. This gave Charles and Alda a little sister to play with. Mae was born on October 17, 1956. She was born in Decatur, Alabama. Her father was a maintenance supervisor, and her mother was a teacher. At the age of three, the family moved to Chicago, Illinois.

Mae Jemison would spend hours in the library studying various areas of science she graduated from Morgan Park High School in 1973 at the age of 16. The same year she enrolled at Stanford University on a National Achievement Scholarship. Her schedule at Stanford was very full. She pursued a double major, she was involved in dance and theater, and she headed the black student union. She graduated in 1977 with a BS in Chemical Engineering and a BA in African and Afro-American studies.

Afterwards, Mae Jemison attended Cornell Medical College. While there she studied in Cuba and Kenya, and she volunteered at a Cambodian Refugee Camp. She received her Doctor of Medicine Degree in 1981.

Mae Jemison spent time as an intern at the LA County USC Medical center. Afterwards, she spent time as a general practitioner. She joined the Peace Corps in 1983 and was in Sierra Leone and Liberia till 1985. While there she also wrote manuals on self-care and initiated guidelines for health and safety. After returning to the US, Mae applied to NASA’s training program. She was delayed due to the Challenger explosion. She eventually became the first African American woman accepted into the program. She completed her training in 1988. Starting out as an official representative at the Kennedy Space Center, Mae Jemison finely got to board the Endeavor to go into space on September 12, 1992. This was the 50th mission for the program.

While she was in space, she performed experiments regarding weightlessness and motion sickness. Mae also conducted an experiment to determine how tadpoles develop in zero gravity. After spending 190 hours in space, she returned to earth on September 20th. Resigning from NASA in 1993, she decided to form The Jemison Group. The Jemison Group is a company that develops advanced technology geared towards daily living.

While serving as a professor at Dartmouth College between 1995 and 2002, Mae Jemison also created the Jemison Institute for Advancing Technology in Developing Countries. At the same time as this in 1999, she started BioSenteint Corp. This is a medical device company. They work to develop a device that monitors the involuntary nervous system among other things.

Mae’s autobiography, Find Where the Wind Goes: Moments from My Life was published in 2001. This book is geared towards young readers and follows from her humble beginnings in life through her space travels. Mae Jemison is also the head of the Dorothy Jemison Foundation for Excellence. She had bid on and won, in 2012, the DARPA 100 year Starship project. This grant will help organizations to do further research on interstellar travel.