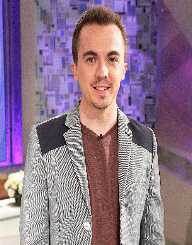 Once considered Hollywood's most bankable teen, multi-talented American film and television actor Francisco Muniz IV was born on December 5, 1985, in Wood-Ridge, New Jersey, United States of America. His father Francisco Muniz III was of Puerto Rican origin and was engaged in his hospitality business.

His mother Denise belonged to a mixed heritage of Italian and Irish ancestry and was a nurse by profession. He and his elder sister, Cristina moved to Knightdale, North Carolina along with their parents when he was four years old. While they were growing up there, Muniz was cast as Tiny Tim in a local community theatre production of English author Charles Dickens's ‘A Christmas Carol’.

The production was part of a talent hunt show and the acting prowess of Muniz was first noticed after his participation in this program at the age of eight. His parents divorced shortly afterwards and Frankie Muniz moved to Burbank, California accompanying his mother. He was homeschooled by his mother since grade six. Frankie Muniz started getting more theatre works and also appeared in some television commercials as well. In 1997, he landed a role in a television movie ‘To Dance with Olivia’. He followed his debut film appearing in the CBS Hallmark Hall of Fame presentation television film ‘What the Deaf Man Heard’ aired in the same year.

Upon appearing on popular television shows like ‘Spin City’ and ‘Sabrina the Teenage Witch’ and having made his film debut in ‘To Dance with Olivia’, he subsequently worked in ‘What the Deaf Man Heard’ and played a small role in the film ‘Lost & Found’ (1999).

Frankie Muniz became famous when he played the role of a child prodigy possessing an intelligent quotient of 165, who is also the title character of the popular sitcom ‘Malcolm in the Middle’, a Fox television presentation.

The show was premiered on January 9, 2000, and continued until 2006. An approximate number of 23 million people watched the premiere episode followed by another 26 million in the second episode. In 2001, he was nominated for an Emmy Award for his performance in the show. He was awarded the “Young Star Award” by ‘The Hollywood reporter’ for his fine performance in the series.

His film career saw an upward trend when he finally played the lead role of ‘Willie Morris’ in the feature film ‘My Dog Skip’, a family period drama, also released in 2000.

Frankie Muniz lent his voice for the character of Domino in the 2000 video game ‘102 Dalmatians: Puppies to the Rescue’. He was featured in another video game called ‘Stargate Worlds’ in the same year.

Continuing in the same vein, he lent his voice for another character actor of the animal cast of the film ‘Dr. Dolittle 2’. In 2002, he starred in the film ‘Big Fat Liar’ portraying the character of a teenage boy called Jason, a habitual liar from Michigan who sometimes stretched things with his over-the-top fake stories.

The film was critically acclaimed with good positive reviews singling out Muniz as the brightest aspect of the film admiring his natural acting capability and his unique sense of comedic timing effusively. His next film, ‘Deuces Wild’ (2002) was an action film depicting the conflict between the gangsters of the 1950 era Brooklyn where he played the character of a strong, tough youngster, caught up in those gang conflicts.

The film was not successful either from the critic’s point of view or from the commercial angle. However, his next film ‘Agent Cody Banks’ (2003) more than compensated for the failure of ‘Deuces Wild’. Appearing as a teenage spy called Bank who turns a CIA agent secretly at the age of 13, the character found it difficult to negotiate and impress upon an attractive girl, who happened to be the daughter of a scientist, in spite of the character’s access to a number of high end vehicles and agile gadgets.

The scientist in question was in possession of an invention capable of causing extensive destruction all over the world if accessed by people wanting to do the same and Bank had to befriend the girl in order to lay his hands over the invention. The role of the girl was played by teen queen Hilary Duff. The film was a runaway success so much so that Metro Goldwyn Mayer (MGM), the producer of the film decided to make a sequel of it.

The proposed sequel, ‘Agent Cody Banks 2: Destination London’ was released in 2004. This time the title character crosses the Atlantic to save the nation from people hungry to bring the world under their tyrannical dispensation.

The only weakness of the title character was once again highlighted in the sequel also as it was to engage in a parley with British secret agent Emily, a beautiful girl, with an excellent comedic effect provided by the pair of Muniz himself and the actor-comedian Anthony Anderson.

The role of the British secret agent was played by Hannah Spearritt. The two spy comedy thriller earned $75 million at the box office combined.

After having received $5 million for his fees for Agent Cody Banks 2, Muniz began thinking about his other interests and passions of his life. Being an avid enthusiast of car racing, he began participating in the sport when on February 18, 2001; he took his place behind the wheel of a pace car in the Daytona 500 motorsport event.

While driving the pace car he was also involved in the process of filming the race for the MTV documentary series ‘True Life’. Unfortunately, he witnessed a ghastly mishap when Earnhardt, one of the racing car drivers crashed his car and was subsequently killed.

Besides acting Frankie Muniz has interest in diverse fields. Prominent among these are car racing, music, writing and producing.

Frankie Muniz had some troublesome health issues having suffered mild strokes twice in the recent past. He was hospitalized after suffering the first attack on November 30, 2012, which was called a transient ischemic attack in medical terminology.

Frankie Muniz suffered the second attack in November 2013. On October 9, 2017, while working on the sets of Dancing with the Stars, he suffered a lot of memory loss which includes memories of his childhood acting days.