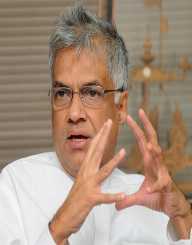 Honorable Ranil Wickremesinghe is a Sri Lankan Statesman and currently the acting Prime Minister of Sri Lanka since 2015.He joined the political world when he was still studying law at the University of Colombo. Even though he graduated as a lawyer, Ranil’s directed his profession in politics. He joined the Sri Lankan government at 28 years old, and after a while, his works impressed even the unknown. This is what led him to be appointed as Sri Lanka’s Prime Minister in 1993 after the death of Ranasinghe Premadasa. Wickremesinghe was once again reinstated to the position from 2001 to 2004 during the general elections. To date, he is regarded as a one of a kind leader who has brought tons of developments in his country. Read further to know more about his early and later achievements.

On 24th, March 1949 Ranil Wickremesinghe was first seen in the world in Sri Lanka, Dominion of Ceylon. His protective father, Esmond Wickremesinghe served as a strict lawyer and a businessman. His mother, Nalini Wickremesinghe worked as a patron of culture and art. As a young lad, he loved to spend time with his four siblings named as Shan, Niraj, Channa, and Kshanika.

Wickremesinghe first joined a prestigious school in Sri Lanka called the Royal College Colombo. After graduation, he enrolled at the University of Colombo where he majored in Law. It was there that he also received his first degree in Law. Afterward, he teamed up with Sri Lanka Law College. After the completion of his course, he was appointed as an advocate at the Supreme Court in 1972.

In his teenage years, Ranil opted to join the United National Party which was at times regarded as the right wing. It was during his active years that he played significant roles in the formation of the party. After graduating from Sri Lanka Law College, Ranil took extra time to understand the political world. With a never give up soul, he was appointed as the chief organizer of Kelaniya Electorate District in 1970.After serving for seven years, he was selected to vie for the Biyagama Electorate District seat when he won in 1977.

During the tenure of President J.R Jayewardene, Ranil was appointed as the Deputy Minister of Foreign Affairs at 28 years of age. All applauded his versatility at work.

On 5th October 1977, Ranil got a seat at the Ministry of Youth Affairs and Employment. He remained in the position for five years where he went to join the National Youth Council.

In 1980 Ranil got a seat as the Minister of Education where he served for nine years. It was also the same period that he introduced a broad range of reforms that improved schools and computing skills. Afterward, he became the Minister of Industries, Technology, and Science. It was during his tenure that he introduced industrial development in Biyagama.
After the assassination of President Ranasinghe Premadasa during a national rally, Ranil was appointed as the Prime Minister of Sri Lanka government. Unfortunately, he remained in the position for a year when he lost his seat to Gamini Dissanayake.

Sad to say, Gamini was also assassinated after servicing for several months as the Prime Minister. This made Ranil vie for the seat where he won with major votes. It was during his doctrine that he played vital roles such as supporting Sri Lanka’s agendas.

In the mid of 1999, Ranil opted to vie for the Presidency, but Chandrika Kumaratunga succeeded him. In the new millennium, the United National Party took the lead during the general election. On 9th, December 2001 Wickremesinghe started his duty as the seventeenth Prime Minister of Sri Lanka.

As the acting Prime Minister, Ranil first wanted to bring back the countries fame by improving its economy. As a result, he formed ties with neighborhood countries where he received immense aid and assistance. It was here that he managed to develop and reconstruct the Sri Lanka city.

Simultaneously, Wickremesinghe tried to form peaceful treaties with the Liberation Tigers of Tamil Eelam-LTTE. It was a firm agreement that was reached on 22nd, in February 2002.As a result, Sri Lanka’s economy increased by 80% where tourist started to increase their visit.

End Of Tenure And Reinstatement

While Ranil Wickremesinghe was still on the verge of forming a peaceful agreement with LTTE, some prominent leaders opposed his move. As a result, he was criticized since it was suggested that the deal would come to part the Sri Lanka’s government. When President Kumaratunga took over, Ranil’s tenure was terminated.

After losing his seat, Ranil went out to focus on other deals for over a decade. Luckily, he was given back his position when Maithripala Sirisena came to power as the seventh President of Sri Lanka. He is currently acting as the Prime Minister of Sri Lanka.

While he was serving as an Education Officer, Ranil introduced new reforms that led to the development of new technology. Also as the Prime Minister, he has made sure the economic reforms have been established.

Early in 1994, Ranil tied a nuptial knot with Maithree Wickremesinghe, an English lecturer at the University of Kelaniya. As a trivia, he is still considered as the prime and ideal Education Prime Minister of Sri Lanka. To date, he serves as an active member of Mont Pelerin Society.