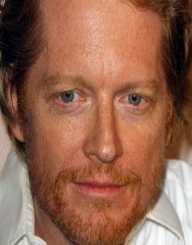 Eric Stoltz is an American actor, director, and producer. Born on September 30, 1961, he came to limelight with his role as Rocky Dennis in the biopic, Mask in 1985. The part earned him a nomination for Best Supporting Actor in Motion Picture at the Golden Globe Award. He has appeared in numerous films including Some Kind of Wonderful, Killing Zoe, Kicking and Screaming, Little Women, The Honey Mooners, Mr. Jealousy and A Murder of Crow among others. Stoltz was a regular director of the television series Glee.

Eric Stoltz was born on September 30, 1961, in Whittier, California to Evelyn B. and Jack Stoltz. His mother was a schoolteacher and violinist, and his father was a teacher. His siblings are writer Susan and opera singer Catherine. Raised in American Samoa and Santa Barbara, California, Stoltz gained interest in playing musical instruments especially the piano as a child. He played the piano for local musical theatre productions in Santa Barbara.

His interest later shifted to acting, which would ultimately become his career. Stoltz received education at San Marcos High School, where he joined the school’s drama team. After graduating, he enrolled at the University of Southern California, in 1979, he dropped out after his first year. In 1981, he left for New York, to study under acting teachers Stella Adler and Peggy Feury.

Stoltz debut feature film was a minor role in Fast Times at Ridgemont High, 1982 directed by Cameron Crowe. He appeared in four other films of Crowe including, Jerry Maguire, The Wild Life, Singles, and Say Anything.

In 1984, Stoltz was cast as Marty McFly for the film, Back to the Future, however, one month into the shooting, director Robert Zemeckis replaced him with Michael J. Fox.

Eric Stoltz gained fame with his role as Rocky Dennis in Mask, 1985, earning a nomination in the Golden Globe Awards. He followed his performance with roles in Code Name: Emerald, Some Kind of Wonderful, Sister, Sister, Haunted Summer, and The Fly II. In the 1990s, Stoltz accepted roles on stage, television, and films. He appeared in films like The Waterdance, Pulp Fiction and produced Bodies, Rest & Motion, Sleep with Me, and Mr. Jealousy.

He also appeared on stage productions in New York and Broadway in works like Three Sisters, Arms and the Man, and Two Shakespearean Actors. His performance in the 1989 Broadway revival of Thornton Wilder’s Our Town earned him a Tony Award nomination. His television roles included Inside, 1996, and The Passion of Ayn Rand in 1999.

In 2000, Eric Stoltz appeared in The House of Mirth, starring Gillian Anderson and followed it with recurring roles in the ABC series Once and Again from 2001 to 2002 as August Dimitri. He also served as a director on an episode of the series in 2002. He gained the lead role in the tv series Out of Order, 2003 and played a child monster in The Butterfly Effect in 2004. After playing a guest role in the NBC sitcom Will & Grace, in 2005, also had roles in The Triangle, Medium, and Close to Home.

Aside from acting, Eric Stoltz is also a director and producer. He directed the cable movie My Horrible Year!, 2001 that earned him a Daytime Emmy nomination. Ain 2005, he directed the film, The Bulls and the “Tombstone” episode of Law and Order. Other directorial works include episodes of the drama series Quarterlife for NBC Network in 2008. He played the role of a serial killer and directed three episodes of Grey’s Anatomy. Stoltz directed 12 episodes of Glee and from 2014 became the producing director of the CBS political drama, Madam Secretary.

Eric Stoltz married Bernadette Moley in 2005. The couple has a child, Catalina Stoltz.