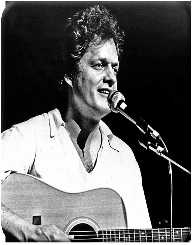 Singer-songwriter Harry Chapin was born on the 7 December 1942 in Brooklyn, New York. His parents were Jim Chapin and Jeanne Elspeth, and he had three brothers. Father Jim was a well-known percussionist. The family was of English ancestry. His parents divorced in 1950 when he was eight years old.

In the early 1970s, Harry Chapin started playing music with John Wallace, Tim Scott, and Ron Palmer. They used to play at various gigs around New York City. In 1972, Chapin recorded his first album Heads & Tales and had a hit with his song Taxi.

In 1972, his second album Sniper and Other Loves Songs were released. His third album was Short Stories, followed by Verities & Balderdash (1974). Paul Leka produced the Verities & Balderdash album, and Harry Chapin had a big hit with Cats in the Cradle. The single went to number one and was his breakthrough hit. Chapin had another hit with W*O*L*D (1974). His final two albums were the penultimate Sequel (1980) and then The Last Protest Singer who came out posthumously in 1988.

Harry Chapin was awarded the Congressional Gold Medal posthumously in recognition of his humanitarian work.

Harry Chapin married Sandy Cashmore Gaston in 1968. When they married, Chapin became stepfather to Sandy’s three children from an earlier marriage: Jamie, Jason, and Jonathan. The couple then had two children: Jennifer and Joshua.

Harry Chapin was involved in raising awareness about world hunger and support many associations, foundations, and charities. He was one of the co-founders of World Hunger Year, currently known as WhyHunger.

In 1981, the Harry Chapin Memorial Fund was set up with assistance from Ken Kragen, Chapin’s former manager and Kenny Rogers with a donation of $150,000, the proceeds of a benefit concert. The name has since been altered to the Harry Chapin Foundation, and the core focus of the foundation is to assist communities across the country.