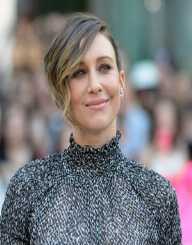 Vera Ann Farmiga was born on 6th August 1973, to Michael and Luba Farmiga. Her parents were Ukrainian, and Farmiga didn’t learn to speak English until she was around six years old. Even though she was born in the US, Ukrainian was Farmiga’s native language.

Her father was a systems analyst who later became a landscaper, and her mother was a teacher. She has one brother who is older, and five siblings who are younger, which is quite a large family. Her siblings are named Victor, Stephan, Nadia, Alexander, Laryssa, and Taissa.

During her childhood, the family moved to different locations to live, but all were in New Jersey, so they remained reasonably local. Vera attended Hunterdon Central Regional High School in New Jersey and graduated in 1991. During her teen years, she also learned Ukrainian folk dancing and toured with Syzokryli, which was a folk dancing group.

During her early high school years, Vera Farmiga came across acting by accident. She played soccer but was sidelined with an injury. The auditions happened to be on for the school play, and one of Farmiga’s friends convinced her to try out. She won the lead role and enjoyed it so much that she went on to study performing arts at Syracuse University. She graduated from the university in 1995.

Vera Farmiga began her career on the stage in 1996. She appeared in several productions with a theater company in New York. From there, she went on to television and landed her first role in 1997. It was for a television movie called “Rose Hill.”

She then went on to star in the Fox television series “Roar.” It debuted in 1997, but only lasted the one season. It was while working on the series “Roar” that Farmiga met her first husband, Sebastian Roche.

Vera Farmiga has had a prolific acting career, having acted in 22 movies between 1998 and 2016. The most mainstream and well-known movie would be “Up in the Air” with George Clooney.

Vera has also worked in other movies with notable actors such as Matt Damon, Leonardo DiCaprio, Meryl Streep, Denzel Washington and Richard Gere. Two major movie roles were turned down in 2011 as Farmiga had fallen pregnant. One of these was a romantic drama by Madonna; the other was an action movie by Marc Forster.

When falling pregnant for the second time, Farmiga tried her hand at directing. The movie was “Higher Ground” in which she also starred. It was critically acclaimed but only had a limited release in the U.S.

Vera Farmiga has continued to work constantly in both films and on television. She played one of the main roles in “Bates Hotel” which began airing on A&E in 2013. Farmiga also became the producer of the series from the second season, and later an executive producer. The show ran for five seasons.

The two stand-out movies for Vera Farmiga would have to be “Down to the Bone” and “Up in the Air.”

Farmiga was critically acclaimed in the movie “Down to the Bone” in 2004, in which she played the part of a drug-addicted mother. She received the award for Best Actress for her role from the Los Angeles Film Critics Association.

Vera Farmiga’s other well-known role was opposite George Clooney in “Up in the Air,” released in 2009. She was nominated for the Academy Awards for Best Supporting Actress, along with several other award nominations for the role she played in the movie.

In 1997, Vera Farmiga married Sebastian Roche, a French actor. They had been co-starring together in the series “Roar.” Seven years later, the marriage ended. There was a divorce in 2004. Farmiga then met a musician, Renn Hawkey, after being introduced by a mutual friend. They married in 2008, and have two children, a son called Flynn and a daughter named Gytta.

Vera Farmiga is a very versatile actress starring in genres from comedy through to horror. She is also very busy with movies already on the agenda up until 2019, so her fans can look forward to seeing her on the big screen for some time yet.