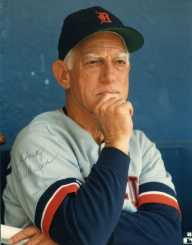 American baseball coach Sparky Anderson was born George Anderson on the 22 February 1934 in Bridgewater, South Dakota. When he was eight years old, his family relocated to Los Angeles.

After playing amateur baseball in Southern California, Sparky Anderson signed as a free agent with the Brooklyn Dodgers (1953). By 1955, Anderson was the every-day second baseman for the Double-A Fort Worth Cats. After the 1958 season, the Dodgers traded Anderson to the Phillies. In 1959, he won the second base position. He then produced 12 extra base hits and 34 RBI and was returned to the minors. He was then with Toronto of the International League (1960-1963), after which he retired.

In 1964, Sparky Anderson aged 30, took over as manager of Toronto. He went on to manage four minor league teams before serving as a third base coach with the San Diego Padres in 1969. In October 1969, he was named manager of the Reds.

Under his coaching, the Reds reached the National League pennant in 1970. In 1975 and 1976, the Reds won back-to-back World Series titles. In 1978, he was dismissed by the Reds. He joined the Tigers halfway through the 1979 season, leading them into the World Series where they defeated the Padres. The Tigers won the American League East (1987). Anderson retired after the 1995 season. His record is 2,194-1,834 wins, ranking at No.6 on the all-time list.

After retiring as a manager, Sparky Anderson worked in the media as a baseball commentator including CBS’s radio coverage of the World Series.

Sparky Anderson founded the CATCH organisation in Detroit in 1987. The organisation provides care for children seriously ill whose parents are financially unable to do so.