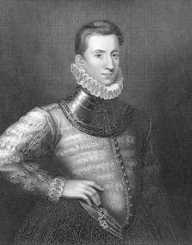 Sir Philip Sidney, born on November 30, 1554, was the eldest son in the family of Sir Henry Sidney and Lady Mary Dudley. He was born in Penshurst in Kent, England. He grew up in a large aristocratic family and was named after his godfather, Spanish King Philip II. His father served in several high royal envoy capacities throughout Britain. As a member of a highly ranked aristocratic family, Sidney was cut out for a career in politics and statesmanship.

When he turned 10 years, Sidney joined Shrewsbury School. Four years later in 1568, he started his advanced studies at Christ Church, a campus college of Oxford University. He left the college without graduating in early 1572. He embarked on a tour of continental Europe for the next three years. He traveled in Europe from May 1572 to June 1575. In his tour, Sidney learned proficiency in classical languages of Latin, French, and Italian. As a member of the English nobility, he made friends with various European politicians and statesmen. He became versed with the dynamics of European politics in France, Poland, Germany, and Italy.

In mid-1575, he returned to England. He settled in the aristocratic circles of politics. He gradually studied the local politics of England. He spent time between his uncle the Earl of Leicester and his younger sister who served as Countess of Pembroke. In 1576, Sidney traveled to Ireland to visit his father, who served as Lord Deputy of Ireland. After serious consideration of the prevailing Irish society, Sidney wrote to Queen Elizabeth exonerating his father from accusations against his administration. He titled the correspondence the Discourse on Irish Affairs.

In 1577, he traveled with a British diplomatic mission to Germany. He tried to mediate a truce between the warring Protestant factions and forge a unified front against the powerful Catholic nations. He sought the help of the German royal family in uniting with England to form a formidable counter-offensive against the Catholics. He however never got any conclusive alliance from the Germans. The Holy Roman Empire allied to Spain, Italy, and France continued to dominate the European affairs.

Sidney progressed well in his role as a royal court official. He became restless for being bypassed for mission appointments since the German mission debacle. He often advocated for the military intervention of the Spanish influence in Protestant regions in Europe. In 1585, Sidney got his chance to fight against Spain. He tried to enlist in the military expedition to Cadiz during England’s war against Spain. He was denied permission by the royal court. To quell his determination, Queen Elizabeth appointed him as the governor of Flushing, a province in the Netherlands. In 1856 he engaged the Spanish army in the Dutch town of Zutphen. He suffered a fatal thigh bone injury from enemy fire. He never survived.

Sidney traversed the European continent as a young man and experienced a literary transformation. He became a gifted poet and wrote many works of literature. He befriended other literary giants like Thomas Drant, Fulke Greville and Edmund Spenser. In his poetic world, Sidney wrote numerous [poems. He went against the conventional prose regulations of contemporary literature to create his own form of rhymes.

In 1578, he wrote the poem Lady of May, in the honor of the British Queen Elizabeth I. He received praises form the royal court for the poetic work. In 1590 he published Arcadia which was a revised version of the 1579 original prose. He explored the complex values of the diverse English community. He touched the rural values, heroic escapades and the romantic episodes within the British.

In 1591, Sidney published Astrophel and Stella. He expressed the notion of love and romance as experienced in the parameters of the French and Italian societies. In 1595, he wrote Apology for Poetry. The poem was considered a rejoinder to Sidney’s attack from another poem School of Abuse. In his poem apology for Poetry, Sidney made a critical analysis of the effects of the British renaissance. With Apology for Poetry, Arcadia, and Astrophel and Stella, Sidney created a place for his legacy in the poetic revolution in Elizabethan England.

Sidney, who served as the member of the British parliament for Kent, married the 15-year-old Frances in 1583. Their only child, a daughter called Elizabeth came in 1585. His earlier efforts to marry Penelope Devereux and later Anne Cecil never materialized the two were forcefully married off to other men.

In September 1586, Sidney went to help the British forces in the Battle of Zutphen against the Spanish army. He suffered a thigh injury from a musket shot. He succumbed to gangrene almost a month later. On October 17, 1856, Sir Philip Sidney died in Arnhem, Netherlands. His colleagues returned his body to England for burial. He was buried in the compound of the Old St. Paul’s Cathedral in London. However, his burial site was consumed by the Great London Fire of 1666.

A staunch Protestant, Sidney is one of the youngest people to be knighted. He became a knight in 1583 at the age of 29. He died aged 31.