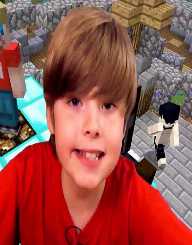 Ethan is the kid behind the YouTube gaming channel EthanGamerTV. Although his parents run the channel since he is a minor, all the delightful and exciting gameplays are his works. Born on July 9, 2006, Ethan is a British gamer who has become a social media phenomena due to his gaming videos. His videos on the EthanGamerTV channel is mainly kid-friendly games meant for his age group. He intrigues his subscribers with games like Minecraft, Red Ball 4, Plants vs. Zombies and other Roblox games. He has two YouTube channel one for solely games and the other one for things aside from games.

The EthanGamerTV channel has almost 1.5 million subscribers and is solely for games. The other channel Ethan has over 141,000 subscribers. Ethan has gained recognition for his channels and won the YouTube Star of the Year in the MEGA Awards 2016. He also earned a nomination for the Nickelodeon Kids' Choice Awards for UK Favourite Tipster in 2016. Ethan has several other interests that make his life complete including playing the piano and basketball.

Ethan has been a game lover since childhood but only took his gaming experience to the web after creating his YouTube channel EthanGamer on August 28, 2013. However, his first video post was on September 29, 2013. With his fun gameplay, he started gaining the attention of fans. Most of his fans are within his age group, and the right side is that his contents are children friendly. Interestingly, he posts videos of his joy and jubilations after reaching each milestone on YouTube. His first milestone video was after he reached 1000 subscribers.

Ethan has since been doing marvellously well and has gained many subscribers with over 1.5 million subscribers on his EthanGamer channel and more than 141,000 for his second channel Ethan. His channels are under the control of his parents because he is just ten years. Ethan gaming experience and being on YouTube has gained him both admirers and critics. Many have of his critics have called for his channel to be blocked since he is a minor. In August 2016, his Instagram account was blocked, and it has been attributed to the fact that he is a minor. However, young Ethan is not backing out and giving in to his detractors.

Ethan is a British kid born on July 9, 2006, in England, United Kingdom. He has some of his childhood life in Australia, and he later returned to England and now lives in Cheshire with his parents. Ethan took an interest in gaming at childhood and took this interest onto the YouTube. Since he is a minor, his channel is under the control of his parents. He loves to watch movies and is a fan of all the Marvel movies, Harry Potter series, and the Percy Jackson series. Aside from that, he plays the piano and also loves to play basketball. Ethan is also a fan of wrestling and admires John Cena and The Rock.