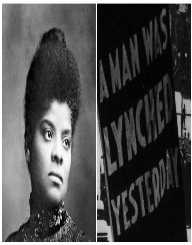 Ida Bell Wells-Barnett best known as Ida B. Wells was an African American journalist, editor, sociologist, suffragist and feminist activist. Born on July 16, 1864, she was an influential leader of the Civil Rights Movement. In 1909, he became one of the founders of the National Association for the Advancement of Coloured People(NAACP). As a prolific writer in her own right, Ida B. Wells documented lynching in the United States in the 1890s.

Ida B. Wells was able to demonstrate that blacks in the South were usually lynched not because they had committed a crime but away and strategy the whites adapted to control and punish the Blacks who competed with them. Ida B. Wells was an active woman right activist, was involved in women’s suffrage movement, and with that formed several women organizations.

Ida B. Wells was born to James Wells and Elizabeth "Lizzie" (Warrenton) Wells on July 16, 1962, in Mississippi. Her parents were slaves of an architect, Spires Bolling. Ida B. Wells was one of the eight children by her parents, and they lived in Bolling’s house now known as the Bolling-Gatewood House. Her father known as the “race man” worked for the promotion of the course of black people after American Civil War and was an active member of the Republican Party. Ida B. Wells enrolled at Shaw University in Holly Spring currently Rust College but was expelled for confronting the college’s president.

Ida B. Wells lost her parents and a sibling, Stanley, during the yellow fever epidemic at Holly Spring in 1878. This left her and siblings orphans. After the funeral of the lost family, some relatives and friend suggested the children be moved to various foster homes but Well objected to the attempt. She rather decided to pick up a job to cater to her siblings.

Ida B. Wells had a job as a teacher in a black elementary school, and so her paternal grandmother, Peggy Wells and other friends and relatives catered for her siblings while she went out for work. During this period she was provoked by the pay inequalities as the white teachers were paid $80, but she received $30 per month. This was a reason for his later involvement in politics of race and equal educational opportunities for black people. Ida B. Wells moved with three of her sibling to live with her aunt in Memphis, Tennessee, in 1883, where he had a job at the Shelby County school system in Woodstock. Ida B. Wells used her summer vacations to attend summer sessions at the Fist University in Nashville and Lemoyne-Owen College in Memphis.

Ida B. Wells had an editorial position in the Evening Star in Washington, DC and under the pen name, Iola wrote weekly articles for The Living Way weekly newspaper. Ida B. Wells wrote extensively on racial issues, and that gained her a reputation in that field. Ida B. Wells became a co-owner and editor of Free Speech and Headlights in 1889. The paper, started by the Reverend Taylor Nightingale, was focused on anti-segregation issues. Her intense criticism of segregation caused her, her teaching job as the Memphis Board of Education did not favor her criticism of conditions in the colored school in the region. This affected her greatly but did not deter her as she continued to write for The Living Way and the Free Speech and Headlight.

In 1892, Ida B. Wells wrote articles in Free Speech and Headlight, which urged the blacks to leave Memphis after three blacks including her friend Thomas Moss well lynched by the white mob to death. This started after Thomas Moss who operated a grocery store that competed with those of the white was comforted and his shop invaded by some whites. In effect three of the whites were shot and wounded during the confrontation, and so Moss and his friends McDowell and Stewart were arrested pending trial. However, write mob took them out the cells and lynched them to death. After the call by Ida B. Wells for blacks to leave Memphis, 6000 of them actually left while others also boycotted white-owned businesses.

After the death of his friends, Ida B. Wells decided to investigate and document on causes of lynching. Ida B. Wells also sought for the reasons and charges by which such murders were melted on victims. With her investigations, Ida B. Wells concluded that most of the black victims of lynching were an act by the whites for gain social control, the inability of them to repay debts, economic competition and not appearing to give way to white. Ida B. Wells, however, found little basis for the most frequent charge, which was sexual abuse or attack on white women. Her finding was published in a pamphlet with the title entitled "Southern Horrors: Lynch Law in All Its Phases."Ida B. Wells also published several other works on lynching including, A Red Record.

Ida B. Wells married attorney Ferdinand L. Barnett in 1895. Barnett was a widower with two children Ferdinand and Albert. The couple also had four children Charles, Herman, Ida, and Alfreda. She died of kidney failure on March 25, 1931, at age 68 in Chicago. She was interred in the Oak Wood Cemetary in Chicago.

Ida B. Wells built by the Public Works Administration as part of the Chicago Housing Authority housing project in Bronzeville, Chicago in 1941 is in her honor. The building was, however, demolished in 2011. The Ida B. Wells-Barnett Museum in Holly Springs, Mississippi is in her honor. The Harvard Kennedy School commissioned a portrait of Wells in 2006 among several other honors.