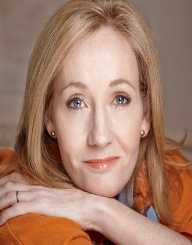 Creator of the popular series Harry Potter – J.K. Rowling is the ninth best-selling author of all time. Not only have Harry Potter and his friends delighted, and changed the lives of millions of fans, both the children and adults alike, this franchise has also changed Rowling’s own life.

J.K. Rowling went from being a complete broke to a multi-millionaire author with the help of the Harry Potter franchise which has touched so many lives and will continue to do so in the future through books, movies, and other mediums.

J.K. Rowling’s real name is Joanne Rowling. She was born to James and Ann Rowling in Yate, Gloucestershire, England on July 31, 1965. Her star sign is Leo.She has a younger sister named Diane.She started writing at an early age of five.

J.K. Rowling went to the St Michael’s Primary School where she was considered a very good student. She also attended the Wyedeanschool and college. She obtained her B.A. in French and Classics from the University of Exeter.

After graduating J.K. Rowling did not start writing at once. Instead, she became a researcher and bilingual secretary for Amnesty International. Her only published work at the time was a short story titled “What was the name of that Nymph again?” Rowling’s first got the idea of a series of Harry Potter while she was traveling on a train from Manchester to London. J.K. Rowling was so motivated to write about the story, which she started writing down her thoughts and began working on the Philosopher’s Stone - the first of Harry Potter books on the same day.

J.K. Rowling was working as a teacher in Portugal taking night classes where she was teaching English. Her personal life was not going very well at the time, and her husband left her and her daughter Jessica. She moved back to Scotland to be close to her sister. She had no job, no way to support her family and had reached a breaking point. To overcome all the frustration, she devoted herself to writing the Harry Potter series and finished the manuscript of her first book in 1995. When did, however, she had no money left to publish the book. The book initially faced rejection from multiple publishers, until finally, Barry Cunningham of Bloomsbury decided to publish it. The book became quite popular, and Rowling began selling the publishing rights of books in the US. Inspired by the amazing success of the first book, Rowling started writing about Harry Potter and his school and his friends.

Less than a year later, her books had sold over 35 million copies and done more than $480 million in business. The series became so popular that it was turned into a movie franchise after Warner Bros. struck a deal with Rowling. Harry Potter and the Goblet of Fire came out on July 8, 2000, and broke all records. It became an international bestseller surpassing the sales of the Prisoner of Azkaban’s first year on its first day itself. The first movie in the Harry Potter series was released in the year 2001 and instantly became a hit among children from all over the world.

J.K. Rowling took a break from writing after finishing the final book.She released a book targeted at adults titled “The Casual Vacancy” in 2012.She also wrote “The Cuckoo’s Calling” – a crime detective novel in 2013. J.K. Rowling has created a whole universe based on Harry Potter where there is much to explore still. In 2016, Rowling started writing scripts for another movie series titled  - Fantastic Beasts and where to find them.

J.K. Rowling received the Legion d’honneur by the French government and the order of the British Empire.

J.K. Rowling was first married George Aranteson October 16, 1992. They had a daughter, Jessica. Arantes and Rowling divorced in November 1790 in 1994.

J.K. Rowling got married to Neil Michael Murray in 2001, who is a doctor. They have two children a son David Gordon Rowling Murray and a daughter Mackenzie Jean Rowling Murray.