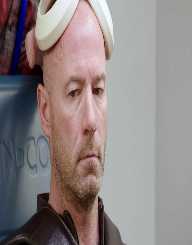 Alan Shearer was born on August 13th, in 1970. His place of birth was in Gosforth England. He is a former football player, and he became famous for being a superb striker. Back in the day, he played in the English club for renowned teams such as Blackburn Rovers, Southampton, and Newcastle United. In addition to his football career, he is also a legend in his international football career while playing for his country, England. Throughout his English league career, he scored 260 goals in the 441 games that he played. This makes him the record goalscorer to this date.

Alan Shearer was born on August 13th, 1970 in England. While he was young, he received encouragements from his father to take his football career seriously. Shearer nurtured his football skills right from the time he was young and played while in Gosforth Central Middle School and also while taking his high school education at Gosforth High School. During his early years on the field, he loved playing as a midfielder. This is because he thought that this was the best way he could get more drawn in in the game.

As a teenager, Alan Shearer played for the Wallsend Boys Club which opened up opportunities for him. While honing his football skills at this amateur football club, Jack Hixon spotted his unique talent. During this time, Hixon was the Southampton’s scout, and he was out in search of young talent. After this, Alan Shearer signed up with Southampton’s youth team, and this is where everything began for him as a professional football player.

Soon, Shearer began playing in first division teams such as Manchester City, Newcastle United and West Bromwich Albion. His outstanding performance landed him his first contract with Southampton Football Club. This occurred in 1986.

At the beginning of his football career at Southampton, Alan Shearer played under the youth team for two years. He was later promoted to join the first team. In 1988, he made his first appearance while playing in the English football league. His first game was against Chelsea. He was a substitute and his role at this time was not noticeable. However, he hit the headlines while playing two weeks later against Arsenal. He scored his first hat-trick during this match hence making him the youngest player (17 years) to do that in first division league. Earlier on, this record was held by the 30-year-old Jimmy Greaves.

In 1991, Shearer played for the under 21 English national team and scored seven goals in the four matches that he featured in. Things improved the following year since he scored thirteen goals in 41 matches.

Still, in 1992, Shearer’s career took a positive turn after being targeted by Blackburn Rovers. Alan Shearer moved to this football club after being offered a sweet deal of €3.6 million. It is worth noting that he had also received a transfer offer from Manchester United while under the legendary coach, Alex Ferguson. His performance was hailed as he put the ball behind the net for 16 times in the 21 games he featured in. In his second season at Blackburn, his scoring record improved as he managed to score 31 goals out of the 40 he participated in. In line with this, he helped his team land on the second spot at the premier league table that season. His remarkable performance did not go unnoticed as he was credited for being the Football Writers' Association Footballer of the Year.

Shearer’s career was in the spotlight during the 1994-1995 premier league season. The signing of Chris Sutton contributed this. Together with Shearer, they were terrific strikers. Shearer broke his record scoring record by having 34 goals under his name. This season was a major success not only for Shearer but also for Blackburn as a club. They won the premier league title. His unique contribution to the overall team’s performance helped him clinch the PFA Players' Player of the Year-1995.

The next season Alan Shearer became a target for Manchester United, but Blackburn failed to release him to the club. Rather, they accepted an offer from Newcastle United in 1996. He moved to Newcastle with a world breaking the record at that time of £15 million. That season he scored 25 goals out of 31 games he played in.

Shearer went on to retire in 2006 after having played 395 successful matches with his Newcastle Club. Three years later, he took over as the manager of his former team, Newcastle. This was short-lived as Chris Hughton took over.

In 1991, Alan Shearer wedded Lainya and had two daughters in their relationship.