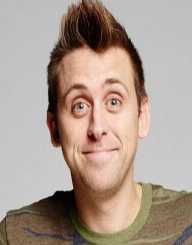 American actor, comedian, producer and vlogger Roman Atwood was born on the 28 May 1983 in Millersport, Ohio.

Roman Atwood is starting producing videos while still in high school. He also worked on commercials. His first YouTube Channel was Sketch Empire. In 2006 he had a DVD series entitled The Nerd Herd.

Roman Atwood turned to comedy and found success with his prank vlogs.

In March 2012 he had his YouTube breakthrough with Cops Get Owned - Epic Pee Prank. The video has since had over 20 million views.

Other prank videos include the Ferrari prank Attack By A Ferrari Owner (24 million views) and the Anniversary prank (80 million views).

He has received two Diamond Play Buttons for his channels.

Roman Atwood was married to Shanna Riley between 2001 and 2008. His current partner is Brittney Smith.