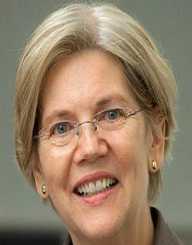 Elizabeth Ann Herring was born on 22nd June 1949, to Donald and Pauline Herring. She was born in Oklahoma City, Oklahoma, in the United States. She was born into a middle-class family, with three older brothers. Her father was a salesman, and he had a heart attack when Warren was 12. The family couldn’t keep up with the medical bills, made even harder because her father couldn’t return to his former work. Her mother joined the catalog order department at Sears, and Warren went to work in her aunt’s restaurant as a waitress when she was 13.

Elizabeth Warren studied at Northwest Classen High School where she was the debating champion, and she then won a debate scholarship to George Washington University. She enrolled in the University of Houston, and in 1970 Warren graduated with a Bachelor of Science in Speech Pathology and Audiology. Warren later enrolled at Rutgers University, Newark, School of Law. She graduated in 1976.

Elizabeth Warren joined Rutgers University, Newark School of Law, in 1977 as a lecturer. In 1978, she moved to the University of Houston Law Center. In 1980 she was appointed Associate Dean for Academic Affairs and was with the university until 1983. She had lectured as an associate professor at the University of Texas School of Law in 1981, and she returned in 1983 as a full professor, staying until 1987.

During this same four-year period, she was a research associate at the Population Research Center at the University of Texas. She studied how people reacted to laws on a day-to-day basis, and she interviewed judges, lawyers, and debtors, and analyzed court records. This established her reputation as an authority on bankruptcy and the laws around it.

In November 2008, Warren was appointed as Chair of the Congressional Oversight Panel which had been formed to supervise the implementation of the Emergency Economic Stabilization Act. Warren has also been Vice President of the American Law Institute and a member of the American Academy of Arts and Sciences.

In 2010, Elizabeth Warren was appointed by President Obama as Assistant to the President and Special Advisor to the Secretary of the Treasury on the Consumer Financial Protection Bureau.

In 2011, she announced she would run for a seat in the U.S. Senate, representing Massachusetts. There was some controversy during her campaign as she had a Native American heritage, and she was accused by some of gaining an advantage due to listing herself as a“woman of color” while at Harvard. She refuted the accusations and was defended by various colleagues she had worked with in the past.

In 2012, Warren ran on the Democratic ticket for the U.S. Senate and won. She became the first woman from Massachusetts to sit in the Senate. She was assigned a seat on the Senate Banking Committee, and she quickly went to work bringing the banks to task. She has positioned herself as the champion for the middle-class. In 2014, Warren was appointed Strategic Adviser of the Democratic Policy and Communications Committee. The position had been created especially for her.

In 2015, Elizabeth Warren and several other Senators re-introduced the Glass-Steagall Act, which was a modern version of the Banking Act of 1933, affording less risk for American taxpayers with the financial system. She sits on four committees, and seven subcommittees. These include the Committee on Armed Services, the Committee on Banking, Housing, and Urban Affairs, and the Committee on Health, Education, Labor, and Pensions.

Warren is running for re-election to the Senate in November 2018. In the 2016 presidential election, Warren was an avid supporter of Hillary Clinton and campaigned tirelessly for her.

She has published countless papers, and her eleventh book was released in 2017. Her books include The Two-Income Trap: Why Middle-Class Parents are Going Broke (2004), A Fighting Chance (2014), and This Fight is Our Fight: The Battle to Save America’s Middle Class (2017).

Among her awards and honors, Warren has the following:

2009: Bostonian of the Year by The Boston Globe

2011: Inducted into the Oklahoma Hall of Fame

Elizabeth Warren's first marriage was in 1968 to her high school sweetheart, Jim Warren. They had two children and then divorced in 1978.