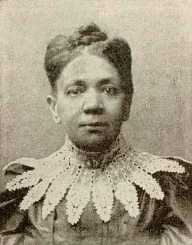 Fanny Jackson Coppin was an African-American teacher and missionary.

Fanny Jackson was born on January 8, 1837, in Washington D. C. She was a slave during her entire childhood. At the age of twelve, her aunt managed to purchase her freedom. During her teenage years, she worked as a servant in the home of the author George Henry Calvert. She spent her free time studying. She became a student at Oberlin College in Ohio in 1860. During her time there, she was elected to the Young Ladies Literary Society. She received her bachelor’s degree in 1865.

Jackson became the first black teacher at the Oberlin Academy Preparatory School. She also started a night school, where she taught freed slaves how to read and write. After her graduation, she got a job at the Institute for Colored Youth in Philadelphia, Pennsylvania. She taught the students mathematics, Greek, and Latin. Within a year she became the principal of the Ladies Department. In 1869, she became the principal of the entire Institute. This made her the first African-American female school principal in the United States. She held this job for the next 37 years.

She also briefly held the position of superintendent. This made her the first African-American superintendent of a school district in the entire country. She managed to make a lot of important changes in the educational system. This had an effect not only on her Institute but on schools all around the city. In 1893, she was invited as a speaker at the World’s Congress of Representative Women. She was one of the five African-American women that were invited to the event. She retired from her job in 1902.

In 1881, Jackson married a pastor named Levi Jenkins Coppin. He was part of the African Methodist Episcopal Church in Baltimore, Maryland. She started to help him out with his missionary work. In 1902, the two of them went to South Africa to continue their projects. They opened up the Bethel Institute, a missionary school that was focused on self-help programs.

After years of missionary work, Fanny Coppin’s health started to decline. She had to return to Philadelphia. She wrote her autobiography, Reminiscences of School Life and Hints on Teaching. She passed away on January 21, 1913, at the age of 76.

A teacher training school in Baltimore was named the Fanny Jackson Coppin Normal School in 1926. It was later renamed to Coppin State University.