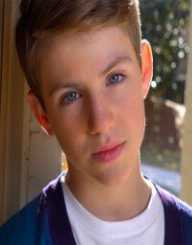 Rolf Jacob Sartorius was born on 2nd October 2002 in Oklahoma. Though Jacob's birthplace is Oklahoma, he was raised in Virginia. Jacob's biological parents were unable to raise him and hence had put him up for adoption. An affluent family adopted Jacob, and thus Jacob moved from Oklahoma to Reston, Virginia. His adoptive parents gave Jacob utmost love and care and encouraged him at every step.

The encouragement from his family helped Jacob discover his love for music and performing. At the tender age of 7, Jacob Sartorius started acting in musicals. His performance in local events earned him fame and reputation, and he became a known face in the neighborhood. But not everyone was happy with his soaring popularity. His friends began teasing him, and he soon became a victim of bullying in school. He had to change schools thrice due to such problems.

To cope up with the bullying, Jacob Sartorius started putting more focus on his hobbies. On 17th August 2014, he posted a static video on the social networking channel Vine. The video contained an anti-bullying message and reflected Jacob's thoughts on bullying. Within a very short span of time, social media was abuzz with lakhs of people sharing the video originally posted by the 11-year-old.

This viral hit video made Jacob Sartorius an online star. He became a regular on Vine, and by the end of the year 2014, he joined another social networking site Musical.ly. He began posting videos on Musical.ly where he merely lip-synced and danced to songs of other artists. His lip-syncing acts escalated his popularity, and he became one of the top stars of the app with a fan base of 14 million followers. Getting a huge fan following on social media boosted his confidence and helped him escape the clutches of bullying.

The child prodigy's talent soon attracted the attention of various music companies. On June 2016, Jacob Sartorius signed a contract with the United Talent Agency and the T3 Music group. His first single 'Sweatshirt' was released for digital download by T3 Music Group on May 3rd, 2016. A month later, on 7th June, Sartorius released the official music video on YouTube. His first single became an instant hit garnering 27 million views and 500,000 comments within three months.

In the same year, Jacob released three more singles titled 'Hit or Miss' on July 25th, 'All My Friends' on October 2nd and 'The Last Text' on December 22nd. His second single 'All My Friends' was released on his 14th birthday, and he got the best gift in the form of 3.5 million views and 28,000 comments. 'The Last Text' is the lead single from his debut Extended Play (EP) that released just a few days on January 20th, 2017. It has already been viewed by 3 million viewers and has received over 70,000 comments.

The internet star is a rage amongst teenagers especially girls. Jacob’s talents are not just limited to singing. He is also known for his comic timings and is well-known for his stand-up comedy acts. But the teenage star also has a considerable number of detractors who leave no stone unturned to make fun of Sartorius.

However, the American Pop Singer who is referred as the 'next Justin Bieber' stays unperturbed and is preparing for ‘The Last Text World Tour’ which is slated to happen in 2017 and Jacob Sartorius will be performing in 7 countries as a part of the promotional strategy for his EP The Last Text.

Jacob Sartorius has an elder sister named Caroline Sartorius, but not much information is available about his parents. In the past, the naughty-yet-mature kid has been romantically linked to actress Luna Blaise & dancer Maddie Ziegler.