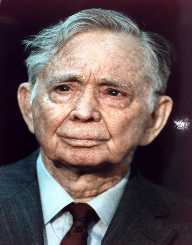 Former Speaker Of The United States House Of Representatives

As a teenager, Carl Albert attended McAlester High School. He graduated from this school in 1927.

Carl Albert studied at the University of Oklahoma, beginning in 1927. Here, he studied political science. While here, he won a national public speaking competition in 1928. The prize was a trip to Europe, which he gladly took. He later graduated from his school in 1931.

After graduating from University, Carl Albert opened his law practice in Oklahoma City. He spent most of his time running his practice until 1941.

In 1941, Carl Albert left Oklahoma to fight for the United States Army in World War II. While in the army, he rose through the ranks. By the end of the war, he was a lieutenant colonel. He left the army in 1946, at the end of World War II.

In 1971, Carl Albert was made the Speaker of the House of Representatives. He stayed in this position until he retired in 1977. He also retired from working as a congressman in this year as well. He retired in part because he was relatively old at this time and because he was involved in a scandal. It was reported that he was taking bribes. He denied he was given bribes, but admitted that he had accepted gifts. He later returned the gifts. He was never charged with taking bribes illegally.

After his retirement, he often would lecture and give speeches at colleges and government functions around the United States.

After retiring, Carl Albert had time to focus on other pursuits, like writing. Along with Danney Goble. He co-wrote an autobiographical work titled Little Giant.

While serving in the United State’s Army, he was awarded a Bronze Star.

Carl Albert was inducted into the Oklahoma Hall of Fame in 1957.

In 1942, Carl Albert married Mary Harmon. This couple had two children together: David and Mary.

The University of Oklahoma also gives out an award named after Carl Albert.

There is a monument made for him in the St. Peter’s College Law Library at his old alma mater, Oxford University.