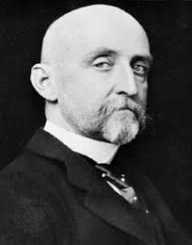 Alfred Thayer Mahan was born on 27th September 1840 in West Point, New York, in the United States. His parents were Dennis and Mary Mahan, and his father was a professor at the United States Military Academy.

Mahan studied at an Episcopal college called Saint James School. He then went to Columbia College and followed that with enrolment into the Naval Academy. He graduated in 1859 as the second top in his class.

The navy commissioned Mahan as a lieutenant in 1861. He served the Union during the American Civil War. From 1865 to 1885, Mahan progressed through the ranks until he became captain. He commanded the USS Wachusett, and he was stationed in Peru. His role was to protect US interests as the War of the Pacific ended.

In 1885, Alfred Thayer Mahan became a lecturer at the Naval War College, where he taught naval history and tactics.

In 1886, Mahan prepared to become a professor. The President of the Naval War College, Stephen Luce, took command of the North Atlantic Squadron. As a result, Mahan succeeded him as the President of the college. He held the position from 1886 to 1889, and then again from 1892 to 1893.

Mahan turned his lectures into books, which became extremely popular once published. He became famous all over the world. He wrote several books on having the power of the seas. These included The Influence of Sea Power upon History, 1660-1783 (1890), and Sea Power in Relation to the War of 1812 (2 vols., 1905).

Power in the Sea

Alfred Thayer Mahan believed the greatness of a country depended on its use of the sea. This was for trade in times of peace, and for control in times of war. He thought the navy should control the sea, and thereby supervising its use. He prepared a secret plan in 1890, in case of war between the United States and Britain.

His works were published at a convenient time. His theory and strength of style won approval from others in the navy, and those who were pro-New Imperialism in Africa and Asia.

New ships such as submarines and destroyers were being built. New technologies such as propulsion and ordnance were also underway, as well as other areas. Due to this, Mahan's theories came at the perfect time. In the German navy, Kaiser Wilhelm II required his officers to read Mahan.

The Japanese Navy translated Mahan's work, The Influence of Seapower Upon History, 1660 – 1783, into Japanese. They used the work as a textbook in the Imperial Japanese Navy. The theory was evident in their fight against the Russians. Still, it also contributed to their loss in World War II.

Alfred Thayer Mahan joined the Bureau of Navigation in 1889, and he served in special service until 1892. In 1893, he commanded the new cruiser, Chicago, as it traveled to Europe. When he returned to the States, he lectured until 1896, at which time he retired from active service.

Mahan returned to duty briefly in 1898, to provide advice on naval strategy when the Spanish-American War was taking place. He continued to write, and several of the most prestigious colleges, including Oxford, Cambridge, Harvard, and Yale, awarded him with honorary degrees.

Alfred Thayer Mahan became President of the American Historical Association in 1902. In 1906, an act of Congress promoted all retired captains to rear admiral if they had served in the American Civil War. As a result, Mahan became a Rear Admiral.

In 1872, Alfred Thayer Mahan married Ellen Lyle Evans. The couple had three children. Mahan died on 1st December 1914, of heart failure. He has had four ships named after him, buildings at several Naval Academies, schools, and a road.