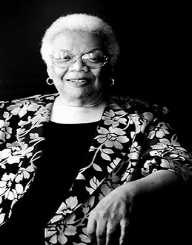 American educator, poet, and writer Lucille Clifton were born Thelma Lucille Sayles on the 27 June 1936 in Depew, New York. She was raised in Buffalo, New York. Her father Samuel Sayles work in the steel mills and her mother, Thelma Moore, was a homemaker. Both parents loved books and literature and encouraged their children to read. Her mother was an amateur poet.

Lucille Clifton was a pupil at Fosdick-Masten Park High School where she matriculated at 16. After obtaining a scholarship, she enrolled at Howard University (1953-1955) as a drama major. Later she transferred to Fredonia State Teachers College.

After her marriage in 1958, Lucille Clifton Clifton worked at the New York State Division of Employment in Buffalo for two years. She was also employed at the Washington, D.C. Office of Education where she worked as a literature assistant. Her first book of poems, Good Times (1969) was well received.

She was a Distinguished Professor of Humanities at St Mary’s College, Maryland and between 1995 and 1999, she served at Columbia University.

Between 1979 and 1982, Lucille Clifton was Poet Laureate of Maryland. Various honors she received including fellowships and honorary degrees, grants from the National Endowment of the Arts and an Emmy award. Her poetry collection Blessing, the Boats, won the National Book award for poetry in 2000.

Lucille Clifton husband was Fred James Clifton whom she married in 1958. He was an academic as well as a sculptor. The couple had six children. Her husband died on the 10 November 1984 at the age of 49. Lucille Clifton died on the 13 February 2010 in Baltimore, Maryland. She was 73.