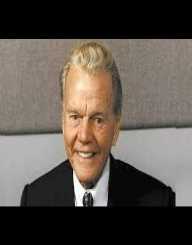 Paul Harvey Aurandt was born to Harry Aurandt and Anna Christenson on 4 September 1918. He had a sister Frances Aurandt Price who died in 1988. Harvey’s father was an American, and his mother was Danish.

Harry Aurandt was murdered when Harvey was three years old. A policeman, he was off-duty rabbit hunting when attacked.

Harvey changed his name from Aurandt to Harvey for professional reasons.

Paul Harvey attended Tulsa Central High School. During his school years, a teacher recognized that he had a unique and impressive voice. He was a notably good orator, even at a young age.

On the recommendation of his teacher, Paul Harvey decided upon a career in radio. In 1933, he started out at KVOO a radio station in Tulsa. As a university student, he initially worked as an unpaid intern doing menial jobs. Later he read commercials and the news. He followed this by working as a station manager at a radio station in Kansas for two years.

Then after moving to Oklahoma City, work at KOMA as a broadcaster. Next up he worked in St Louis, where he was a roving reporter and director of special events for KXOX. Harvey was in Hawaii when the Japanese attacked Pearl Harbor.

He enlisted in the US Army in 1943 and served until March 1944 when he was discharged due to an injury to his heel.

By 1944, Paul Harvey was an experienced broadcaster. He moved to Chicago and joined the ABC affiliate, WENR. The owner of the building WENR occupied was Joseph P. Kennedy, father of John F. Kennedy. They became friends, and Joseph Kennedy was generous in his support of the aspiring young broadcaster. He recommended him to the ABC Radio Network, and Network affiliates began asking for Harvey news broadcasts.

Harvey broadcasts were heard on 1,350 commercial radio stations plus 400 stations of the Armed Forces Radio Service.

Paul’s famous radio shows, Paul Harvey News and Comment and The Rest of the Story.

Paul Harvey received many awards including his election to the National Association of Broadcasters National Radio Hall of Fame, the Oklahoma Hall of Fame and the DeMolay Hall of Fame. In 1992, he was a recipient of the Paul White Award from the Radio-Television Digital News Association. And in 2005, he received the Presidential Medal of Freedom from President George W. Bush.

Paul Harvey married Lynne Cooper in 1940. He proposed on their first date. Lynne Cooper collaborated with her husband. An award-winning radio producer, she was responsible for producing The Rest of the Story.

The couple had one son, Paul Harvey, Jr.

Paul Harvey continued working until late in life. He was offered a ten-year contract age at 80.

There were complaints about Harvey’s endorsement of products, but no action was taken.