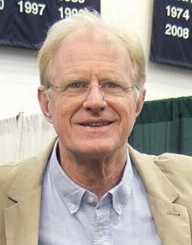 Ed Begley Jr. is a Golden Globe-nominated American actor who has also been nominated for six Primetime Emmy Awards. He has worked with many renowned directors like Paul Schrader, Rob Reiner, Joel Schumacher, etc. and his filmography includes many blockbuster and cult films like Batman Forever, This is Spinal Tap and Ghostbusters. Begley is also an environmentalist who actively promotes eco-friendly products and advocates recycling and veganism to fulfil his goal of living a life with a minuscule carbon footprint.

Begley was born on September 16, 1949, In Los Angeles, California. His family moved to Buffalo and he enrolled at Stella Niagara Education Park. They returned to California where Begley graduated from Notre Dame High School in Sherman Oaks, another Catholic school. He also studied at Los Angeles Valley College in North Hollywood.

Begley’s father was the Oscar-winning actor from the Golden Age of Hollywood, Ed Begley. Till sixteen years of age, Begley used to believe his father’s actual wife Amanda Huff to be his mother. Subsequently, he found out that his real mother was Allene Jeanne Sanders. Ed Begley Sr. was never married to Sanders.

Begley started his career with bit-part roles in a number of shorts and TV series in the late 1960s and early 1970s, including a small part of a student in The Bill Cosby Show in 1971. He guest starred in 7 episodes of the comedy-drama Room 222. In the late 1970s, Begley started doing more films. In 1978, he starred alongside Harvey Keitel in Paul Schrader’s crime drama Blue Collar. In 1982, he acted alongside Richard Gere and Debra Winger in the romantic drama An Officer and a Gentleman. In the hit TV series Battlestar Galactica, Begley played the role of Viper pilot Greenbean.

The tall and blond actor with a deep, dense voice has acted in a number of mockumentaries which include Rob Reiner’s This is Spinal Tap, and some Christopher Guest’s comedy flicks like Best in Show, the folk concert based A Mighty Wind, and For Your Consideration, etc. He had recurring roles in many sitcoms including Meego, Arrested Development, Rob Thomas’ Veronica Mars, etc. For his recurring role of Dr. Victor Ehrlich in the medical drama series St. Elsewhere, Begley earned one Golden Globe and six Primetime Emmy Award nominations. Here, he shared screen space with Emmy award-winning actor William Daniels of whom he was a lifelong fan.

In the radio adaptation of the Original Star Wars trilogy, Begley played the role of Boba Fett in Return of the Jedi. On stage, he directed the musical Cesar and Ruben. For 16 years, (2000-2016) Begley was a member of the Board of Governors of the Academy of Motion Picture Arts and Sciences.

Begley was married to Ingrid Taylor from 1976 to 1989. The couple had two children. He married actress and producer Rachelle Carson in 2000 with whom he has one child.