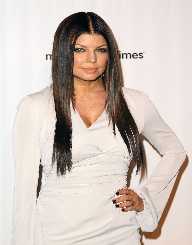 Fergie is an American singer who is best known as the lead singer of the hip-hop group, The Black Eyed Peas.

Fergie was born as Stacey Ann Ferguson on 27 March 1975 in Hacienda Heights, California. As a child, Fergie was a member of the Girl Scouts. She was a student at the Mesa Robles Middle School. Fergie was an excellent student who received straight As. Also while in school, Fergie won some spelling bee competitions. Fergie received her high school education at Glen A. Wilson High School. Fergie was also a cheerleader at school. Fergie tried to forge a career as an actress. She provided the voice of Sally in two made for TV films based on the Peanuts comic strip. Fergie voiced Sally in It’sFlashbeagle, Charlie Brown and Snoopy’s Getting Married, Charlie Brown. She also provided the voice of Sally in four episodes of The Charlie Brown and Snoopy Show. She played Stacey in the children’s programme, Kids Incorporated. The show was about the members of a teenage band and their everyday lives.

Fergie appeared in the first six seasons of the show. Along with other members of the Kids Incorporated cast, Stefanie Ridel, and Renee Sandstorm, Fergie formed the band Wild Orchids. The band struggled to gain a recording deal and worked with Sony Publishing before RCA Records offered them a deal in 1994. The band reached the charts with their first single, At Night I Pray. They released a self-titled album in 1997. The album sold a million copies worldwide and did not enjoy any great success. The band toured with Cher, providing the opening act on her Do You Believe Tour. While in Wild Orchids Fergie went on a rug and sex binge. She became addicted to crystal meth and was unable to kick her addiction until she left the group in 2001.


Career With The Black Eyed Peas And Solo Career

Fergie joined the hip-hop group The Black Eyed Peas while recovering from her meth addiction. The group had previously released two albums, but it was the third studio album which was Fergie’s first with the group which brought them to stardom. Elephunk was released in 2003 and was a huge success. The album reached number fourteen on the Billboard charts but was a top ten hit around the world. It would sell over nine million copies and has platinum status in ten different countries. The performances of four hit singles boosted the album, Where is the Love, Shut Up, Let's Get it Started and Hey Mama. Where is the Love was a departure from the groups work before Fergie’s arrival, but it proved hugely successful. The song was number one across Europe and was the best selling single in the UK in 2003.

The second single, Shut Up, was similarly successful achieving a number one chart position in a large number of countries. Hey Mama, the third single, did not perform as well, it reached number twenty-four in America and was a top ten hit in some European countries. Let’s Get it Started, a reworking of the album track Let’s Get Retarded, featured in some film soundtracks and reached number twenty one on the USA Billboard charts. 2005 saw the group release the second studio album since the inclusion of Fergie. Monkey Business debuted at number two in America. It would go on to sell over ten million records and reach platinum status in thirteen countries. Don’t Phunk With My Heart was the first single from the album and it reached number three in America, this made it the group’s first top five hit in their native land.

The second single, Don’t Lie, was overshadowed by another track from the album, My Humps. My Humps was then officially released by the band after it had already gained mainstream popularity. Pump It was the fourth and final single from the album. All the singles enjoyed chart and commercial success. The following year Fergie released her first solo album titled, The Dutchess. The album reached number two on the US album charts. Six singles were released off the album, London Bridge, Fergalicious, Glamorous, Big Girls Don’t Cry, Clumsy and Finally. London Bridge was a number one hit in America. Fergalicious reached number two on the Billboard Hot 100 Glamorous, and Big Girls Don’t Cry both topped the American charts, as well as gaining number one spot in some other countries.

2006 also marked Fergie’s return to acting. She appeared in the disaster remake, Poseidon. The following year she appeared in Robert Rodriguez and Quentin Tarantino’s Grindhouse. She also appeared in a star-studded cast in the musical drama, Nine, which was released in 2009. The film starred Daniel Day-Lewis and also featured Sophie Lauren, Judi Dench, Penelope Cruz and Kate Hudson. 2009 brought Fergie’s third album with The Black Eyed Peas.

The E.N.D was the group’s first number one album in America; it also performed well around the globe. The album featured the hit single I Got a Feeling, which stayed at number one on the Billboard charts for fourteen weeks. It replaced another single from the album, Boom Boom Pow, at number one which meant the group was at number one for twenty-six weeks in a row. In 2010, The Black Eyed Peas released another studio album, The Beginning. The Beginning was less of a success than previous efforts by the group. Fergie released MILF $ as a solo single in 2016. The single was released in anticipation of the release of a new solo album which is titled, Double Dutchess.

In 2009, Fergie married Josh Duhamel; the pair had been dating since 2004. Together they have a son, Axl. Fergie legally changed her name to Fergie Duhamel in 2014.

Fergie has been nominated for sixteen Grammy Awards as a solo artist and as part of The Black Eyed Peas. Her first nomination came in 2004 when the song Where is the Love, received two nominations. Her first Grammy Award win came in 2005. As part of The Black Eyed Peas Fergie won Best Rap Performance by a Group for, Don’t Phunk With My Heart. Fergie won best Pop Group Performance in 2007 and 2010 with The Black Eyed Peas. She also won a Grammy for Best Short Form Music Video and Best Pop Vocal Album in 2010. In 2012, she picked up a Grammy for Best Collaboration with Rihanna, Kanye West and Kid Cudi.