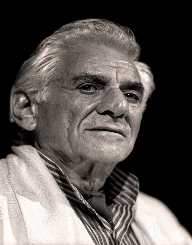 Leonard Bernstein was born on August 25, 1918, in Lawrence, Massachusetts. His parents Jennie and Samuel were immigrants from Ukraine. His father was a hairdressing supplies salesman. Bernstein was called Leonard by his parents, but his grandmother insisted his name to be Louis. He finally changed his name to Leonard when he was 15 years old.

Bernstein began showing interest in music from an early age. His father was initially against the young boy's interest but finally began taking him to orchestral concerts and supported his musical education. The family has gifted a piano from their cousin, and Bernstein began learning how to play. Bernstein attended the Garrison Grammar School and later went to Boston Latin School.

Bernstein graduated from Boston Latin School in 1935 and enrolled at Harvard University. Bernstein studied music, and his final year thesis was entitled “The Absorption of Race Elements into American Music.” While at Harvard, Bernstein made friends with philosopher Donald Davidson. The two often played piano four hands. Bernstein also wrote music for Davidson’s play The Birds. Bernstein was briefly involved in Harvard Glee Club and mounted the student production of The Cradle Will Rock.

Bernstein graduated from Harvard in 1939 with Bachelor of Arts degree cum laude. After graduation, he enrolled at the Curtis Institute of Music. There, Bernstein began studying conducting under Fritz Reiner and piano under Isabelle Vengerova. He also took classes in orchestration, counterpoint and score reading. Bernstein did not particularly enjoy his time in Curtis but mentioned his mentors as very important influences. In 1940, Bernstein was invited to the Berkshire Music Center at Tanglewood and joined around 300 students for a summer music school. Bernstein was one of the five students accepted into the conducting master class with Serge Koussevitzky, who inspired his musical aspirations even further.

After the summer camp, Bernstein found himself out of a job. He began taking different jobs, mostly transcribing music. He did not have to look for a job long since he was offered a position of assistant conductor at the New York Philharmonic. During this time, many musicians were drafted in the army, and the lead conductor Artur Rodzinski was given a recommendation for Bernstein. In 1943, Bernstein’s career took a turn. Guest conductor Bruna Walter had fallen ill, and Bernstein was asked to step in as the conductor for the concert. His performance amazed both the crowd and the players, and he was featured on the front page of The New York Times.

In 1945, Bernstein began working as a conductor for the New York City Center orchestra and remained in the position until 1947. During this time, he also traveled United States, Europe, and Israel, giving guest performances. However, his career was overshadowed by the rumors about his sexuality. One of Bernstein’s mentors, Mitropoulos advised him to marry to remove all speculations. For this reason, Bernstein married the actress Felicia Cohn Montealegre. He loved his wife, and the couple had three children together. However, throughout his life, Bernstein had extramarital affairs with younger men.

During the 1950s, Leonard Bernstein took several international tours. In 1952, he founded the Creative Arts Festival at the Brandeis University. During this time he also began working as a teacher and hosted the television shows “Omnibus” and “Young People’s Concerts,” allowing him to reach wider audiences. During the 1960s, Bernstein became increasingly busy working as the Music Director of the New York Philharmonic. During this decade, his two major works was the Kaddish Symphony and Chichester Psalms. Bernstein decided that he needed more time for composition and stepped down from his position at the Philharmonic in 1969.

Bernstein made two major tours in the 1970s, touring Europe in 1976 and Asia in 1979. He had a strong relationship with the Vienna Philharmonic Orchestra, where he conducted nine completed Mahler symphonies and wrote a ninety-minute program around Vienna for Beethoven’s 200th birthday celebration. In 1976, Bernstein decided not to conceal his sexuality and left his wife to live with his partner Tom Cothran. However, his wife was diagnosed with lung cancer the next year, and Bernstein moved back in with her until her death in 1978.

In 1980, Bernstein was awarded the Kennedy Center Honors. Throughout this decade, he continued to teach, conduct, compose and produced television documentaries. From this decade, his most notable works are the opera A Quiet Place and Halil for flute orchestra. In 1982, Bernstein and his friend, musician Ernest Fleischmann founded the Los Angeles Philharmonic Institute summer training academy and began serving as the artistic director and taught conducting.

In 1989, Bernstein conducted and recorded his operetta Candide with the London Symphony Orchestra. As a part of the celebration of the fall of the Berlin Wall, he conducted Beethoven’s Symphony No. 9 in the Schauspielhaus in East Germany. In 1990, Bernstein was awarded the PeamiumIperiale award by the Japan Arts Association for lifetime achievement. With the money from the prize, he founded The Bernstein Education Through the Arts Fund to develop arts-based education programs. In 1990, Bernstein made his final performance at Tanglewood. During the performance, he suffered from a cough and in the end appeared to be in pain. On October 9, 1990, Bernstein announced his retirement and died five days later from a heart attack. He was also suffering from mesothelioma, which caused the heart attack.