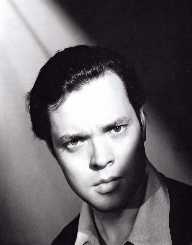 Orson Welles was born on May 6, 1915, In Kenosha, Wisconsin, USA. His parents were Beatrice (Ives) and Richard Welles. He also had one brother Richard “Dickie” Welles. The family moved from Wisconsin to Chicago in 1919. Shortly after, Beatrice and Richard divorced. Orson and Dickie then lived with their mother. Sadly, Beatrice died in 1924, when Orson Welles was only nine years old. After her death, Orson and Dickie went to live with their father. Sadly, the Welles family faced tragedy again when Richard died in 1930. After his death, Orson and Dickie lived with a family friend, Maurice Bernstein.

Because of Orson’s constant shuffling between family members, his schooling history is more erratic than most. After he moved in with father, he was enrolled in a public school, but then was later moved to a private school, Todd Seminary for Boys. While in school, Orson Welles joined the Todd Troupers, a theater group within the school. In the group, he wrote and produced his plays for the other students at the school.

Orson Welles graduated from the school in 1931. After graduating he was offered a scholarship to attended the prestigious Harvard University, but he turned down the offer to travel abroad in Europe instead.

While abroad, Orson Welles did some acting on stage, as well as working as a writer and a director. Some of the countries he traveled to included Ireland, England, and Spain. When he got back to the United States, he continued to act in community plays. Orson Welles made his debut on the New York stage when he played Tybalt in a production of Romeo and Juliet. A producer, John Houseman, saw him perform and found him more jobs.

Working on the stage wasn’t Welles’ only job at the time. Orson Welles had started his career as a radio announcer for CBS in the 1930’s. He was a narrator, as well as a writer, for the many radio shows he did. While working for the station, his voice became famous for The Mercury Theatre on the Air he narrated, as well as for the War of the Worlds fiasco that occurred when he read H.G. Well’s famous book of the same name on the radio and many radio listeners thought the world was actually being attacked by aliens.

In 1939, Orson Welles signed on with RKY Pictures in Hollywood. This was to be the start of his famous film career. However, it was not until 1941 that he made his debut in Hollywood. He co-wrote, starred in, and directed the movie, Citizen Kane. This was to be one of his most successful films. After this film, he continued to work with RKO Pictures on a few more films, including All is True and The Stranger. However, RKO Pictures was becoming tired of working with Welles, as they claimed he was difficult to work with. In the middle of the 1940’s, Orson Welles left Hollywood for a short time to work on Broadway. He started shooting movies again in 1946 and released his next movie, The Lady from Shanghai, in 1947. From then on, until the late 1980’s, Orson Welles continued to write, produce, and act in movies. Some of his most famous movies are listed below.

Throughout Orson Welles’ long and impressive career, he won over 20 awards. Some of his most prestigious awards are listed below.|
Oscar for Best Writing for an Original Screenplay (Citizen Kane)
Cinema Eye Honors Awards, The Influentials Award (F is for Fake)
Hugo Award for Best Dramatic Presentation- Short Form (War of the Worlds (Radio))
Cannes Film Festival Best Actor (Compulsion), Technical Grand Prize and the 20th Anniversary Prize (Falstaff) and the Grand Prize of the Festival (The Tragedy of Othello The Moor of Venice)

Orson Welles has won two Lifetime Achievement Awards. The following groups have awarded him: American Film Institute and the Directors Guild of America.

Orson Welles suffered a heart attack and died on October 10, 1985, in Hollywood, California, USA. He was 70 years old when he passed away.