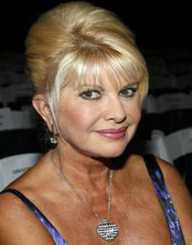 Ivana Marie Zelnícková was born on February 20, 1949. She was born in Gottwaldov, Czechoslovakia which is the new Zlin and Czech respectively. Her parents are Miloš Zelní?ek and Marie Francová. She is the former wife of Donald Trump, and she was a famous model back in the day.

Both Ivana and Trump were part of the elite group in New York City during the 80s. In 1990, the couple walked different paths after their divorce. As a result of this, Ivana walked away with 20 Million dollars as a divorce settlement. Part of her significant publishings that hit the headlines includes The Best Is Yet to Come: Coping with Divorce and Enjoying Life Again. In this publication, she publicly advised women to take their wallets to the cleaners rhetorically.

Ivana Zelní?ková was born in the town of Zlin. While she was still young, she received numerous forms of encouragement from her father to take her skiing talent seriously. She was at her best right from the time she was only six years old. At 12, she enrolled in the national training program. Her skiing talent took her to places all across Europe where she was featured in major tournaments. In 1967, she joined Charles University in Prague. While still in college, she did not stop skiing. As a matter of fact, from what she says, she had been selected to represent her country in the skiing Olympics of 1972.

It was in 1971 when Ivana got married to Alfred Winklmayr who was a skier by profession. He was also a real estate agent. Their relationship did not last long as they divorced after two years. She later left Czech and went to Canada. Here, she was going to stay with her childhood boyfriend named George Syrovatka. She went ahead to take English classes at McGill University which would improve her English. In addition to this, she worked as a model for individual fur companies in Canada which were well known. Sooner or later, she moved to New York where she was to promote Montreal Olympics.

It is in New York that Ivana Zelnícková met with Donald Trump. Shortly after knowing each other, they got married in 1977. Their wedding was quite over-the-top, and they had gained recognition all over the U.S. With massive financial finances backing them up, together they worked on large-scale projects such as renovating the Grand Hyatt Hotel, a building of Trump Taj Mahal Casino Resort and Trump Tower.

Together, the Trumps had three children including Donald John Jr., Ivanka Marie, and Erick Fredrick.

The early 1990s, a rumor was that Donald Trump was cheating on Ivana Zelní?ková. Trump was having an affair with Georgia’s former beauty queen called Marla Maples. A few years later, Ivana filed for a divorce and claimed a more significant share of Trump’s property claiming that she had played a substantial role in Trump’s success.

Nonetheless, the couple’s annulment was settled in 1992. After her divorce, she took three years off before getting married to Riccardo Mazzucchelli. This marriage was short lived as they only lived together for two years.

After divorcing Trump, Ivana saw it wise to call this part of her life as reinvention. During this time, she wrote and published two novels, Free to Love and For Love Alone. Her real-life experiences were also shared in another book she wrote in 1995; The Best Is Yet to Come: Coping with Divorce and Enjoying Life Again.

Later in the 90s era, she went ahead to launch a fashion company. This company was called Ivana Haute Couture. This group was meant for manufacturing jewelry, clothes, and fragrances. Similarly, she established another media company, Ivana Inc. This company was different from the first as it deals with Ivana’s public figure and other media shows. In 2006, Ivana Trump had a show-up and running called Ivana Young Man.